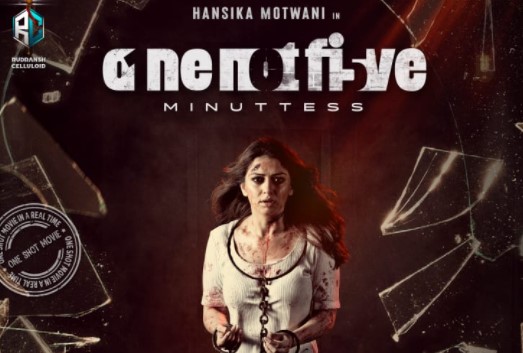 Story completely Revolves around a girl facing tough challenges, threats in her life. How she flights back all these is going to be the crux of this movie. 105 minutes is a Complete thriller film as it can also be know by poster itself.

Hansika Motwani is Playing the Main role and also this is a Single Character film. This movie is almost debut for all the crew members except Hansika. Bommak Shiva Producing it under banner of Rudransh Celluloid. Ruju Dussa is the Story writer, Screen Writer and also Director of this Movie.

Sam CS is Composing the Music while Cinematography is being Handled by Kishore Boyidapy. This Picture is Creating a History in film Industry with One Shot Movie in Real Time. Shooting was done in Independent House at Rajendranagar in Hyderabad. Other Details of the 105 Minutes movie are given below.

Digital Streaming Rights of One Not Five Minuttess Movie aren’t announced by any of the film makers. Shooting of this film was just completed and it is now in Post Production Shedule. First this film may release in theatres only then it may stream on OTT. No Direct OTT Release May happen.

OTT Rights details of this Movie wasn’t given as if now. This Movie May bag Hit as it is the first movie shot in single in real time. It is also an experimental picture in film industry. Buzz is that Movie is expected to release in January before or after sankranthi.

Watch Movies only in Theatres or on OTT’s Only. Keep Visiting our Website to get Latest Updates on Movies OTT Releases, Review, Satellite Rights and Many More.