Top 10 Best Comedians in Tollywood: According to one of Telugu’s most gifted filmmakers, laughing is a blessing, not laughing is a disease, and the ability to make other people laugh is a holy power. Over the course of several decades, Tollywood has produced a number of great comedic actors. Comedy actors like Relangi and Padmanabham will live on in the hearts and minds of Telugu moviegoers forever, but there are many others who have also made indelible marks on the business. When compared to other languages, it is indisputable that Tollywood has the largest amount of comedians. To make you laugh out loud at the theatre, we provide our top 10 list of Telugu comedians. 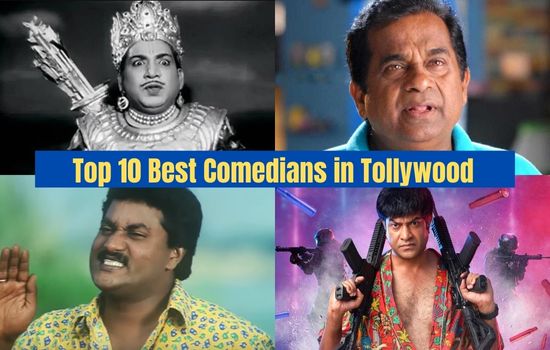 He was primarily recognised for his work in Telugu film, but Relangi Venkata Ramayya, better known simply as Relangi, was an Indian actor, comedian, and producer. He was honoured with the Padma Shri for his contribution to Indian cinema in 1970.

Raja Babu, whose real name was Punyamurthula Appalaraju, was a popular Indian actor and comedian who primarily appeared in Telugu films. He is widely regarded as one of the best comedians in Telugu today. The city of Rajahmundry in Andhra Pradesh, where Rajababu was born, unveiled a 9-foot bronze statue of him in 2012.

Suthi Velu, born Kurumaddali Lakshmi Narasimha Rao, was a famous Indian actor and comedian who primarily appeared in Telugu films. He’s been nominated for four Nandi Awards and has appeared in over 200 films.

Kanneganti Brahmanandam, or simply Brahmanandam, is a popular name in Indian cinema, especially Telugu film, where he performs as an actor, comedian, impersonator, and voice actor. Famous for his comedic roles, he has a wide fan base.

Ali is a popular Indian actor and comedian who primarily appears in Telugu media. He appeared in over a thousand Telugu movies. Two Nandi Awards and two Filmfare South Awards have been bestowed upon him.

In India, M. S. Narayana starred in comedic roles for the Telugu film industry. In most films, he played the part of an alcoholic. His many iconic roles are still beloved by Telugu moviegoers long after he’s gone.

Indian actor Indukuri Sunil Varma, or just Sunil, is a staple of the Telugu film industry. Sunil, who is best known for his comedic performances, has starred in more than 180 films throughout his career. He has picked up a total of three Nandi Awards from the state and two Filmfare Awards South.

Vennela Kishore (born Bokkala Kishore Kumar) is a well-known Indian actor and director who specialises in Telugu-language films. The name “Vennela” was given to him after his debut film, also called “Vennela,” because of his comedic roles in it. Two Nandi Awards, two SIIMA Awards, and one IIFA Utsavam Award are among his many accolades.

Over the course of his career, Tollywood actor Krishna Bhagavan has starred in more than 350 films, typically in comedic roles. He also has a significant reputation as a published author. Telugu viewers especially adore his impeccable comedic timing and witty one-liners. His unique dialect is an extra bonus.

Kunath Venu Madhav was a popular Telugu film actor, TV host, mimic, and comedian who passed away in India. Many of his roles are still favourites among Telugu moviegoers, and he is able to successfully imitate the mannerisms of other famous actors in the genre.