Top 10 Best Singers in Tollywood:  When you’re feeling overwhelmed by your daily routine, music can be a great way to relax and unwind. It’s common for people to listen to love songs, duets, or even trance music if the vocalist is really captivating. There have been a number of fantastic new vocalists to emerge in Tollywood over the past few years. More and more people from all walks of life are breaking into the music industry as singers. A lot of famous singers also dabble in acting and directing music. The top ten vocalists in Tollywood are listed below. 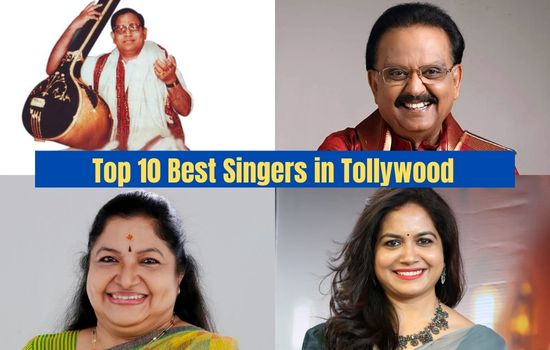 Ghantasala Balaramayya was a prominent figure in Telugu filmmaking, acting, and production in India. Some of his most famous works are Sri Seetarama Jananam, Balaraju, Swapna Sundari, and Sri Lakshmamma Katha.

He was an Indian playback singer, TV host, actor, composer, dubbing artist, and film producer: Sripathi Panditaradhyula Balasubrahmanyam, or SPB, SP Balu, or Balu. He is largely considered to be among India’s all-time great musicians.

From Andhra Pradesh, India, Sistla Janaki is a playback vocalist and composer of occasional music. Known as the Nightingale of South India and Janaki Amma, she has earned the utmost reverence from her peers. Heavily featured in Indian films, she has become a household name because to her playback singing. In Tamil Nadu, she is called “Isaikkuyil,” while in Karnataka, she is known as “Gaana Kogile.”

For more than sixty years, Pulapaka Susheela, better known by his stage name P. Susheela, has lent his voice to the films of South India, particularly those shot in Andhra Pradesh. She is widely regarded as one of India’s finest and most well-known playback singers.

Chithra, or K. S. Chithra, is an alias for the Indian playback vocalist and Carnatic musician Krishnan Nair Shantakumari. Over the course of her four-decade career, she has recorded more than 25,000 songs in a wide range of languages, including those of India and other countries. She is also known for her extensive history of collaboration with music composers A. R. Rahman, Ilaiyaraja, Hamsalekha, M. M. Keeravani and with the playback singers K. J. Yesudas and S. P. Balasubrahmanyam over the years. There is a widespread consensus that she is a cultural hero among the states of southern India.

Kattassery Joseph Yesudas is a renowned Indian musician and playback vocalist who specialises in Hindu devotional, classical, and cinema music. He is revered as a musical legend and a symbol of Keralan culture.

Playback singer and composer Karthik hails from India. In the beginning of his career, Karthik sang background vocals, and he has subsequently transitioned to a playback singer role. He has sung over 8,000 songs in over a dozen Indian languages, including Tamil, Telugu, Malayalam, Kannada, Odia, Bengali, Marathi, and Hindi.

Playback singer and voice actress Sunitha Upadrashta is best known for her contributions to Telugu cinema. She has won nine Nandi Awards and two Filmfare Awards South, both for her work in different fields. When she was only 15 years old, she won a National Award for light music from All India Radio.

Playback vocalist Anurag Kulkarni is a fixture in Indian cinema, especially those of the Telugu language. With all of his songs in Telugu films, he is quickly becoming a phenomenon, and he has only recently begun singing in other languages.