Top 10 Most Charitable Actor in Tollywood: Celebrities are not just earning whooping money and saving them many celebrities are doing social services but they don’t like to publicize it, when it comes to Telugu Film Industry heroes like Mahesh Babu, Pawan Kalyan who saved many lives, However, in this article, we listed out Top 10 Most Charitable Actor in Tollywood 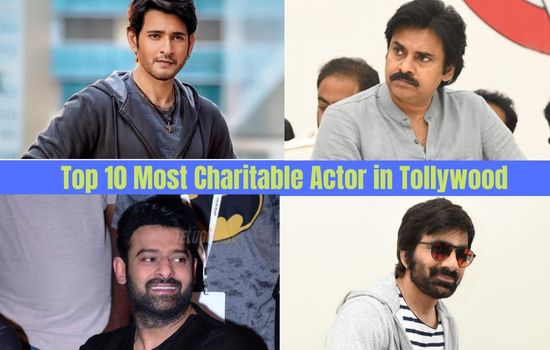 Top 10 Most Charitable Actor in Tollywood

Mahesh Babu is one of the most humanitarian actors in India. Mahesh Babu is more of a giver than we gave him credit for, giving away roughly 30% of his annual revenue to charity. The hugely successful actor enjoys being generous, but he doesn’t want his good deeds publicized. Mahesh Babu has adopted multiple villages with the intention of making them more prosperous and advanced by providing basic necessities, in addition to donating substantial sums of money to various causes, such as disaster management or similar organizations that support the cause.

As the most well-known and well-loved actor in the Telugu film industry, Pawan Kalyan serves as a wonderful example of how to live a life of service to others. Pawan Kalyan gave a lot of money to various charities. He has also given to non-profits such as shelters for the elderly and children with special needs. He gave 50 million rupees to help those affected by Cyclone Hudhud.

Chiranjeevi, a megastar in India, is well-known for his philanthropic work. The Chiranjeevi Charitable Trust was set up by him in 1998. Even Organ Donation Centers have his full confidence. Thousands of blood donations and eye donations have been made possible by the trust. Chiranjeevi has given Rs.5 lakhs ($80,000) to the East Godavari district to build a facility for the disabled in the village of Uppalaguptam.

The Young Rebel star Prabhas has recently donated Rs. 5 lakhs to ‘Jesus old age home’. The image of this cheque is being circulated in social media. In addition, he gave twenty million rupees to the hudhud victims’ fund. He also calls his fans to take part in helping the people affected.

Allu Arjun, fresh off the success of “Bunny,” gave a donation of Rs.1 lakh to the CARE Little Hearts Foundation. He also donated the money he earned after participating in Brain of Andhra (MAA TV program) to Little Hearts Foundation. The administration at the CARE hospital has expressed their appreciation for Allu Arjun’s altruistic outlook. He gave twenty million rupees to help the victims of Hudhud, with the intention that most of the money be used to help the fishing industry recover by restocking supplies including boats, nets, and other equipment.

Balakrishna fan association, NBK Helping Hands has taken on the responsibility of providing education to over 1,000 destitute children across the state.

Nagarjuna represents the HIV/AIDS movement as an advocate. He co-founded Blue cross of Hyderabad with his wife, Amala. Also, he promised to give his organs to science. He’ll represent the government agency Jeevandan and the private hospital chain he’s helping to fund in their ambitious “Organ Donation” advertising campaign.

It has also come to light that Mass Maharaja Ravi Teja contributed Rs.10 lakhs to the CM relief fund. Mass Maha Raja Ravi Teja has joined the ranks of Telugu film actors who have donated money to the film industry workers who are in dire straits as a result of the Indian government’s lockdown announcement. Corona Crisis Charity (CCC) was founded by the Telugu film industry and is being led by Megastar Chiranjeevi to aid Tollywood’s film crew members in times of need.

During the aftermath of the hudhud cyclone in Andhra Pradesh, Jr. NTR gave 20 lakhs to the CM’s Relief Fund to help with relief efforts. This heroic figure gave Rs.5 lakhs to the family of a fan who was crushed to death during the Baadshah(2013) audio launch.

Ram Charan Teja and his wife Upsana are big supporters of the organization Save A Child’s Heart. All of the wedding guests and family members of these selfless couples made donations to the same charity in lieu of traditional wedding gifts. The Hudhud Relief Fund also received his donation of Rs.10 lakhs from him.