Top 10 Best Dancer in Tollywood: Tollywood is the c/o address for the best dancers, it’s fact that Tollywood haa many of best heroes who can dance well unlike any other industries, Right from Chiranjeevi to contemporary heroes, everyone has their own style of dancing and with their dancing style they have created a fan base, even now fans and movie lovers do festival while see them dancing on screen, However, in this article, we listed out Top 10 Best Dancer in Tollywood 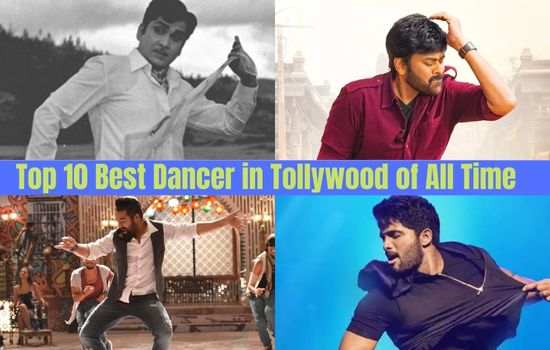 Now, we recognise that there are numerous dace subspecies. Classical dance and folk dancing were the norm, however, prior to the 1970s. The evolution of dance in Telugu movies mirrors the development of the genre itself. And if you want to know which star gave our Tollywood industry its first dance lessons, it was none other than ANR. He was the most famous dancer of his era. There was an elegance and rhythm to his dancing! He was always quite involved in bhajana and traditional dances, even as a little child. He has a wealth of stage experience, and he was nearly as skilled in playing female roles. His vast theatre training shows in the fluidity of his body language, the nuance of his expressions, and the tempo of his movements.

Using his dance moves in his music videos, megastar Chiranjeevi gave Tollywood a fresh new style. Throughout the ’90s and ’00s, his elegant dance moves and unique flair made him a fan favourite. The king of Tollywood dancing is unquestionably Chiranjeevi.

Nandamuri Balakrishna has a reputation for his high-octane dancing. His dance moves in recent songs like “Ammu Kutti” and “Jai Balayya” have been impressive.

In the Telugu film industry, Junior NTR is known by his stage name, Tarak. In Tollywood, he is second only to Megastar Chiranjeevi as the best dancer of all time. Tarak has extensive dance training, and is famous for his ability to perform any style of dance.

Allu Arjun is known as one of Tollywood’s hardest working actors. Whenever he appears in a movie, the audience goes wild for his dance routines. The actor’s uncomplicated dance moves in the recent film Pushpa were a highlight.

Charismatic South Indian film star Ram Pothineni is also widely regarded as one of Tollywood’s most talented dancers. His acting skills are also highly regarded, earning him numerous awards. This top dancer in Tollywood is known for his “chocolate boy” persona, and his fans are completely invested in it. Even more of his fans are going crazy over his dancing skills.

It is commonly said that a son will take after his father in every way. We could argue that the statement is justified when discussing Ram Charan and his famous father, Chiranjeevi. Seeing Ram Charan dance, which he learned from his father and is very good at, is a lot of fun. The audience is mesmerized by his fluid movements and quick legs as he dances. His attractiveness, acting skills, dancing ability, and impeccable taste have won him many fans.

Although he got his start in the Telugu film industry, you can catch him in Hindi blockbusters like Baaghi. This badminton star turned dancer is a star in Tollywood. His popularity has skyrocketed thanks to his endearing dance numbers and his romantic roles.

Sunil’s comedic roles have made him famous in South Indian cinema. He has also won a number of awards for his comedic abilities. In the film Andala Ramudu, he played the lead role for the first time. We are aware of all of these facts about Sunil. Perhaps you have forgotten that she began her career in 1995 as a dancer in Hollywood movies. Furthermore, he had enrolled in a dance school in Hyderabad. When it comes to Tollywood dancing, he is top-notch.