Villains are ones who are at par with heroes in the movies. The negative role has a large part in movie success ratings. Therefore, there are handful actors who play villanism in movies. We bring you the best and top viallains in Telugu movie industry. 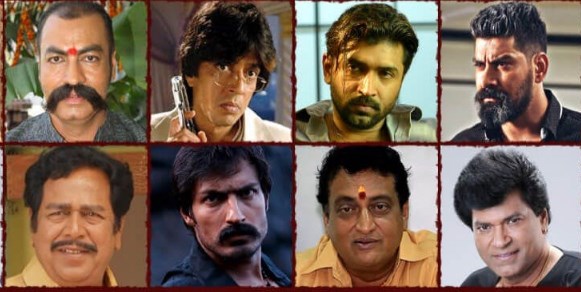 Prakash Raj is a versatile actor who can do any kind of role. He bagged national awards and few film fare awards in the villain category. He acted mostly in south Indian movies.

Jagapati Babu who acted in lead roles in several films has started as a villain in several movies. His first role as a villain is Legen movie directed by Boyapati Seenu.  He charges around 3 to 4 crore for a single movie.

Vivek Oberoi is indian actor who acted in Tamil, Telugu, and mostly in Hindi lanugeges. He got a fame in Raktha Charitra movie directed by Ram Gopal Varme.

Ravi Kishan who played the role of Maddala Shiva Reddy in Race Gurram is one of the best actors in film Industry. He played viallina role in several movies.

Ashish Vidyarthi is one of the actors who played a negative roles in several Telugu movies like Annavaram, Gudumba Shankar, Pokiri and more. He has got a fame in Pokiri movie.

Sai Kumar who acted in all south indian languages is the best actor. He played a negative roles in several movies. Apart from an actor, he renders his voice to many artists like Rajashekar, Suman and more.

Sampath Raj is one of the best actors who acted in Tamil, Telugu, and Hindhi movies. He played villan roles in the movies.

Aadi Pinisetty is the son of veteran film director Ravi Raaja Pinesetty doing as lead roles and villan roles too. He acted as villan in few Telugu and Tamil movies as well.

Rao Ramesh son of late villain Rao Gopal rao is one of the finest villains in Telugu film industry. He played many different roles. However, he’s recognized mostly for villain roles.

Sonu  Sood who started his acting career in Hindi films as a side role entered into Telugu movies as a villain. He acted amazingly in Arundhathi’s movie. For this role, he got a Filmfare award.