Vaishnav Tej Upcoming Movies List: Panja Vaishnav Tej is the brother of Actor Sai Dharam Tej. He is one more actor from mega family with the blessings of Tollywood Megastar Chiranjeevi. His elder brother Sai Dharam Tej entered into cine field and proved himself as an actor and gained immense support and audience appreciations. 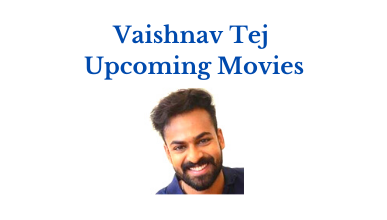 He acted with his uncles Pawan Kalyan and Chiranjeevi in Johny (2003) and Shankar Dada M.B.B.S (2004) movies as a child artist. Panja Vaishnav Tej turned as a Telugu Cinema Hero with Uppena, which released into theaters on 12th February, 2021 with Blockbuster talk. In this film he romanced with Krithi Shetty, who is model and also new comer to the film Industry.

He was born to Chiranjeevi sister Vijaya Durga and Dr Siva Prasad in Hyderabad city on 13 January 1990. Due to of his interest in movies he learned acting from Satyanand film institute, Vizag as suggested by Pawan Kalyan and Chiranjeevi. Earlier, many of the actors in Mega Family like Vaishnav Tej uncles, brothers and nephews trained in the same Satyanand institute.

He made Tollywood debut with the movie Uppena. Earlier, this movie is all set to release on April 2,2020. But due to this pandemic movie release date is postponed. For this movie, Devi Sri Prasad composed music in Sukumar Direction under Mytri Movie Banner. Vaishnav Tej is going to romance with a fresh face Kriti Shetty. Actor Vijay SethuPathi will also play a Prominent role in Movie Uppena. It is Written & Directed by Buchi Babu Sana.

Panja Vaishnav Tej  who is  enjoying the success of ‘Uppena‘ is already in the shoot for his subsequent film directed by  Krish Jagarlamudi. Rajeev Reddy and Jagarlamudi Sai Babu will bankroll this film while Rakul Preet Singh will be seen as the heroine in this film.

Vaishnav has agreed to play the lead role in a sports drama which will be directed by debutante Prudhvi and produced by Annapurna Studios. The young mega hero will be seen as a hockey player in the sports drama. He liked the story very much and instantly gave his nod to be a part of the project. He will also be undergoing a physical transformation for this role.