Sasana Sabha Movie Review: Amid having new actors, Sasana Sabha has created a lot of buzz with the trailer, However, the captivating trailer and promotions raised expectations, and Nata Kiriti Rajendra Prasad, 7/G Brindavan Colony fame Sonia Agarwal played the pivotal roles makes the film in the headlines, well carrying with these expectations the film got released today, let’s delve into the in-depth review and find out whether this political dram worth watch or not. 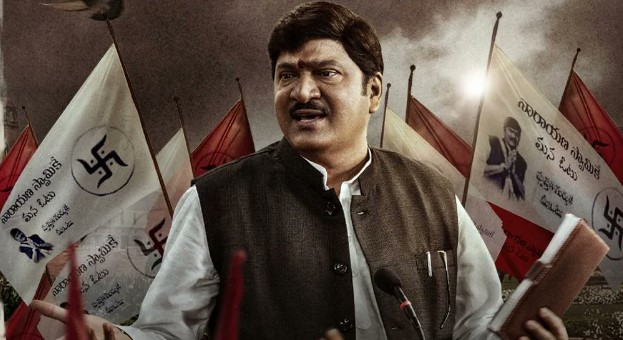 Sasana Sabha narrates Narayana Swamy(Rajendra Prasad) whose intention is to do good for the people as he will contest the elections against the greedy politician played by Sonia Agarwal, his ultimate motive is to win in the election to rule the people, things are not smooth as it seems, the threat will encounter in the name of Surya(Indrsena) the most dangerous criminal, Finally, what was the connection with Indrasena, with Sonia Agarwal and Rajendra Prasad is forms the rest of the story.

Political films are not new to us, over the years we have seen countless films in the political backdrop and Sasana Sabha comes under the same category. The film starts off on a good note, it then dives into the main plot, and slowly the film gets interesting with Rajendra Prasad’s scenes in the first act, after that the film falls flat with a routine hero introduction, boring love track, and a snail-paced screenplay which never keeps us engaged in the first half.

The second half has the same problem, except few political scenes, there is nothing new in the narrative, the love story, comedy, and many commercial elements seem forcibly placed in the story and there is absolutely no proper conflict in the film, though the intense premise makes you invested in the story for a while although it’s very tough to hold the audience attention till the climax and the biggest drawback of the film is the outdated plot.

Talking about the performances debutant  Indrasena as Surya is just okay as he succeeded in maintaining the heroic look but completely failed in performance, there is no single expression he emotes well in the film, 7/G Brindavan Colony fame Sonia Agarwal seems unfit for the role though she is a good actress although this greedy politician role doesn’t suit to her, the breath for the film is Rajendra Prasad as Narayana Swami did a fine job and rest of the cast did as per the film requires.

Though the story is good, amidst the content-based films are making in Telugu K Raghavendra Reddy who was the writer of the film has become an outdated story and Venu Mandikanti partly succeeded in engaging the audience.

Technically, Sasan Sabha looks good, though the film is made on a limited budget although Krishna Murali made it looks like a big film with his stunning visuals, though the story is routine, the technical brilliance makes you glued to the seat.

Overall, Sasana Sabha is a one-time watch film that can be watched by only a few sections audience.