Rajendra Prasad Wiki and Biography: Indian actor Rajendra Prasad, also referred to as Gadde Rajendra Prasad, is best known for his work in Telugu movies. He was born to middle-class parents in Nimmakuru, Krishna District. He earned an engineering degree from Andhra University, but he decided to pursue music instead. He initially struggled to break into the industry but eventually found work in the movie Sneham. 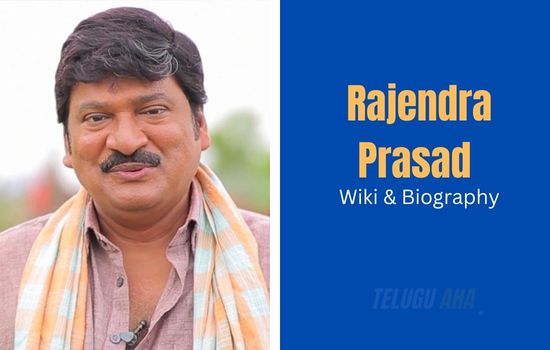 Before entering the film industry, Rajendra Prasad completed his formal education and earned a certificate in ceramic engineering. His son recently married in February 2015 in Hyderabad. He is a gifted comedic actor who has elevated the quality of every film in which he has appeared. He began his career in the industry with voiceovers and supporting roles. In the film industry of the South, he is widely regarded as the King of Comedy.

Beginning with Vamsy’s Ladies Tailor in the 1980s and 1990s, he rose to prominence for his comedic roles. Over the course of his 26-year film career, he appeared in over 200 Telugu films and a handful of Tamil films. Rajendra Prasad recently competed against Jaya Sudha and Murali Mohan for the position of MAA (movie artists association) secretary. His devoted fans have given him many titles, including “King of Comedy,” “Natakireeti,” “Divine Comedian,” “Rastra Hasyapathi,” “Andhra Charlie Chaplin,” “Millennium Family Hero,” and “Ra.”

The actor, who currently resides in Hyderabad, is also highly keen in film production. In films like Erra Mandaram, Aa Naluguru, Aha and pellanta, Devullu, Onamalu, Aagadu, etc., his talents and charismatic performances are on display. He has performed in leading and supporting roles in Telugu, Tamil, and Hindi films.

In the past 35 years, he has appeared in about 200 films. In addition, he has garnered four Nandi awards. 1997 marked his entry into the Tamil cinema industry with the release of his first film, Vasuki. He has appeared in films in both Kannada and English, showcasing his versatility. He plays dual roles in seven films. Performers have significant roles in films like as Julai, S.O. Satyamurthy, and Srimanthudu.