Avatar: The Way of Water Telugu Movie Review: When the first Avatar film was released in 2009, it had a profound effect on cinemas around the globe. Director James Cameron promised two more installments in the series after the first one was a smash hit. Fans began holding out hope that a sequel to Avatar will be announced soon. After nearly 13 years, the sequel to “Avatar” has hit theatres. “Avatar: The Way of Water” Let’s take a close look at this praised film to see if it lives up to the hype. 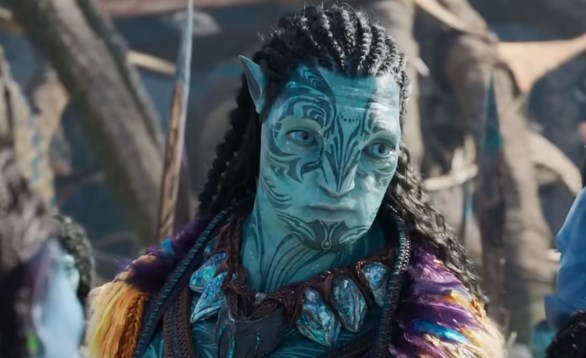 Jake Sully has reconciled with his biological family and relocated to Pandora. When Jake, Neytiri, and the Na’vi military face up against an ancient enemy who has returned to finish what he started before, they will need to work together to rescue their home.

It’s challenging to make viewers invested in and enthusiastic about TV shows set in fantastical universes. The fantastical world of “Pandora” that James Cameron created for the first Avatar film and the way he presented the plot stunned audiences. Unlike the first film, Avatar: The Way of Water is not set in the verdant forests of Pandora but rather the ocean. Never before have we witnessed such breathtaking visuals on a 3D or 4DX screen.

The visual effects and other technical aspects are the highlights of the film, as would be expected, but it is the story that makes it memorable. The plot of “Avatar: The Way of Water” is engaging, and it will help us forget that the film is two and a half hours lengthy (more than three hours). The film also features stunning visuals and moving sequences. Whenever a highly anticipated sequel to a blockbuster film is released, expectations tend to be sky high. The film will be a failure at the box office if it fails to meet any of these expectations. However, James Cameron not only delivered on the hype with “Avatar: The Way of Water,” but he also blew beyond audience expectations.

It’s easy to forget that real individuals were behind the acting in these roles. When we watch the film, we don’t see the actors portraying those characters; we see people from a planet called Pandora fighting for their lives. For many spectators, this is more than simply a movie; it’s a piece of art and an experience, so it’s better not to criticise any of the actors’ performances.

Technically speaking, “Avatar: The Way of Water” is quite intriguing. We’re afraid that if we close our eyes, we’ll miss something incredible. The technical crew should be commended; the film is full of gorgeous visuals. Despite the fact that Pandora is not an actual planet, these 3D images bring us there. Watching this film in a theatre with a large screen and great sound is essential due to the extensive underwater photography throughout.

James Cameron, a visionary and inventive filmmaker, conceived of the concept for “Pandora Planet.” His plans for the technical staff, sound design, and other aspects of the production are all laid out for you to see. That unreal appearance is due in large part to his efforts on every aspect of the film. After watching this director’s excellent follow-up, fans are prepared to wait as long as necessary for the next Avatar film. There needs to be a step up in quality for the upcoming films in the franchise.

As a whole, “Avatar: The Way of Water” is a once-in-a-lifetime film that demands to be experienced on massive screens and in 3D.