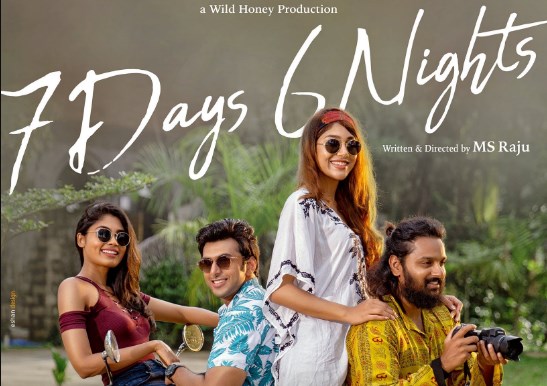 7 Days 6 Nights Story details aren’t revealed by Director MS Raju. He said that its going to be an Adult Romantic Drama Movie. Story may revolve around bold elements with Contemporary issues.

Mega Film Maker MS Raju himself is the Writer and Director of the Film. MS Raju’s Son Sumanth Ashwin is being introduced as Producer through this movie. Production is being done under Sumanth Art Productions.

Samarth Gollapudi is Composing the Music while Cinematography is being done by Nani Chamidi Setty. Shooting Part is wrapped by the movie’s team in Mangalore and Goa. Dubbing and Post Production is only left.

7 Days 6 Nights Movie’s Release Dates or OTT Rights details aren’t announced by any of the Film Makers. Shooting was wrapped up recently and Movie makers announced that they are planning to release it soon as only Dubbing part is left. 7 Days 6 Nights is expected to release within a Couple of Months.

7 days 6 Nights movie may release in a couple of months. Makers are planning for a Grand Release in theatres. If everything goes well in theatrical release then OTT Release Date can be expected by the end of this Year.