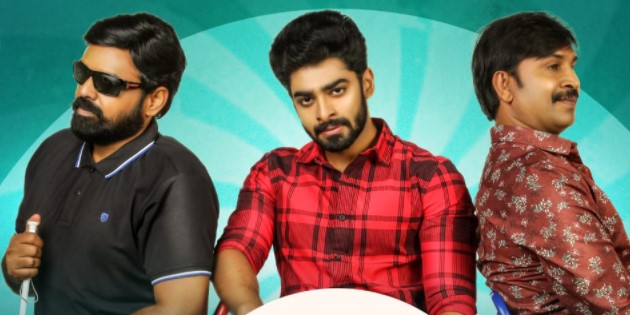 A Comedy Thriller film. Three guys who are deaf, dumb and Blind go to Police Station to report crime. How they report crime.. Will they able to get caught criminal to police, how they manage incidents with their disabilities is going to be funny part of the movie.

Apparla Sai Kayaan is the writer and Abhilash Reddy is the Director of this movie. Other lead roles were played by Twisha Sharma, Shwetha varma and others. Suresh Bobbili Composed Music while Cinematograpy was done by Garudavega Anji.

Achut Rama Rao Produced it under banner of Chitra Mandir Studios. This film is going to be a comedy entertainer in the end of this year. Below are the other details of this movie.

Mugguru Monagallu is all set to release in theatres on 6th August 2021. OTT Rights of this movie aren’t Confirmed by the film makers till now. Srinivas Reddy comedy is going to be highlight in this movie though he cant hear he has the ability of lip reading.

If Everything goes well in releasing movie in Theatres then OTT Release date can be expected in September / October 2021. Though this movie didn’t get a publicity much as other movie, by the trailer it seems to be the best comedy entertainer in telugu  at this end of year 2021.

Watch Movies only in theatres or on OTT’s Only. Keep Visiting our Website to get Updates on latest Movies OTT Releases, Reviews, Satellite Rights and Many More.