Tuck Jagadish Movie OTT Release Date: Much awaited Movie Natural Star Nani Starring Tuck Jagadish going to stream on Amazon prime on the Occasion of Vinayaka Chavithi that is on 10 September 2021. Story is Written and Directed by Shiva Nirvana. 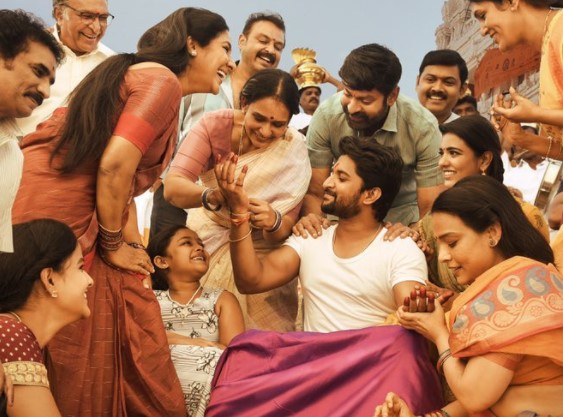 Lot of Buzz is surrounding about this Movie’s Story. Nani and Jagapathi babu are brothers in this movie. Jagapathi Babu who Plays the role of MRO is the Step Brother of Nani. Both are in funny quarrel at all times. Because of one land issue Jagapathi Babu will be beaten by Rowdies. How Nani takes revenge.. How he solves the Problem is going to be the crux of the story. By Released it seems to be the village backdrop family drama movie.

Rituvarma and Aishwarya Rajesh Played Female lead in this movie. Sahu Garapati and Harish Peddi Produced this film under banner of Shine Screens. Films shooting started in February 2020 and later it was suspended twice because of pandemic restrictions.

Shiva Nirvana Collaborating with Nani after Ninnu kori. This director has been famous for romantic entertainers, but this time he has come forward with Action family drama.

Tuck Jagadish is all set to release on OTT Platform Directly. Digital Rights of this Movie were sold to Amazon Prime. As Corona Third wave seems to be start so makers have planned to release directly on OTT skipping theatrical shows. Tuck Jagadish is the much awaited movie in tollywood.

Tuck Jagadish is going to Streaming on Amazon Prime from 10 September 2021. Coinciding the Vinayaka Chavithi Festival makers have planned to release on this day. As Narappa has made a blockbuster hit though it released directly on OTT. So Tuck Jagadish makers are taking risk and stepping forward for the same.

Watch Movies only on OTT’s or in Theatres. Keep Visiting our Website for Updates on Latest Movie OTT Releases, Reviews, Satellite Rights and Many More.