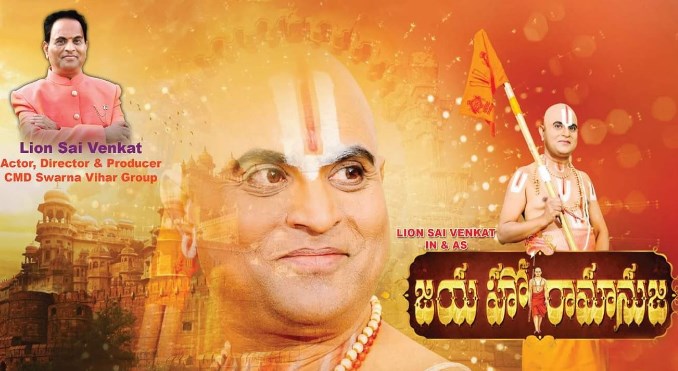 Jayaho Ramanuja is a Complete Epic Drama. Story revolves around the life of Sri Ramanuja who was the Devotee of Lord Vishnu. As of now only Title poster was released. More details are yet to come out.

Lion Sai Venkat appears as Ramanuja in this movie. Other cast and Crew details of this film are yet to come out. This film has been in making since 3 years and is expected to release in 2022.

Jayaho Ramanuja Movie is all set to hit big screens Soon in 2022. Swarna Vihar Group CMD Lion Sai Venkat has himself acted, directed and Produced this movie. He bankrolled this project under banners of Sudharshanam Creations.

Jayaho Ramanuja Movie may release by mid 2022. Shooting got completed and makers are planning to release it soon. As of now only Title Poster and first look poster was released.