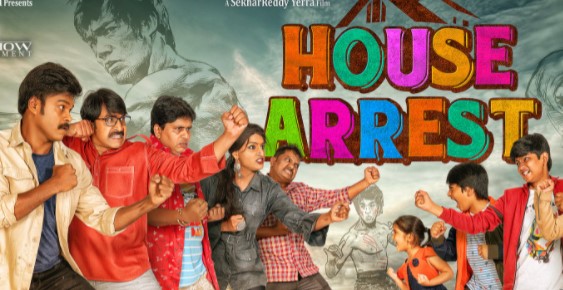 House Arrest is a Comedy Packed Family Drama Movie. By the Released trailer story can be assumed as Follows. One day at night theifs enter into a Luxurious Building. Inside they find Children. Children get frightened and don’t know what to do. Thiefs first threaten Children and later has a plan of kidnapping them. Children tries to Contact Police through SMS. Police will be in try to cath the location of the House.

Niranjan Reddy Producing this Movie under banner of Prime Show Entertainment. Anup Rubens Composing Music while Cinematography is being handled by J Yuvraj. Renowned writer Chandrabose Penned lyrics for Songs in this movie.

House Arrest seems to be a Fun Entertainer. Director Anil Ravipudi has released Trailer of this House Arrest on 23rd August 2021. Main lead roles in this movie is being Played by Srinivas Reddy, Saptagiri, Allari Ravi Babu, Adhurs Raghu, Ravi Prakash, Sunayana, Thagubothu Ramesh and others.

House Arrest Movie is all set to Hit Big Screens on 27th August 2021. OTT Rights of this movie aren’t announced by any of the film makers. House arrest is a Comdedy Packed Family Drama Movie. As Corona Restriction are also lifted up, Makers Planned to release it in theatres.

As House Arrest Movie is going to Release in theatres on 27th August 2021, Then OTT Release Dates can be Expected in September 2021. This movie seems to entertain Children also a lot. Lot of Childrens also Played lead roles in this Movie.