Prabhu deva My Dear Bootham Telugu Movie OTT Release Date: Ace dancer Prabhu deva is back as an actor in Telugu after a long time. His recent Tamil fantasy movie “My Dear Bhootam” is releasing in Telugu with the same title. Actor turned Dancer gave some memorable hits in Telugu namely Premikudu, Mr. Romeo and others. Hope he gets another mighty hit with this fantasy fun filled movie “My Dear Bootham”. This film is releasing in theatres on July 15, 2022. Tamil rights of the film are brought by Zee5 and the OTT release date will be announced by them anytime soon as the movie is running successfully as of now in theatres. 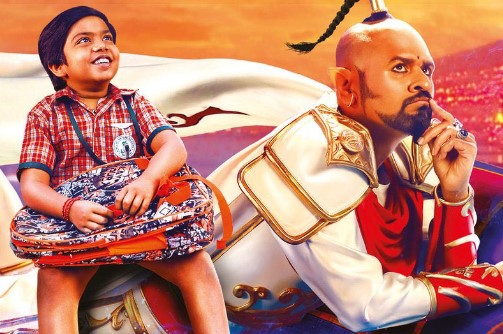 An unhappy and overly protected kid named Thirunavukkrasu accidentally stumbles on a statue and unleashes Karkimuki, a genie who is trapped inside it for years. Karkimuki upon releasing uses his powers to fulfill the wishes of the Kid and helps him surpass all his troubles he is facing due to his stammering.

Prabhu Deva movies that got released in Tamil recently haven’t fared well at the box offices and few direct OTT releases didn’t help the actor in any way. However he managed to get hold of few more projects that are yet to release and My Dear Bootham after the post production was premiered and brought by Zee studios. Digital Rights of the film are in hold of Zee5 and the OTT release date will be announced by the same soon, while the satellite rights of the movie are yet to be finalized.

My Dear Bhootam is a multi-lingual movie, which is also slated to release in Tamil on the same day as Telugu. Movie has the story that is well known and loved by many 90’s kids. The story is similar to Aladdin and the magic lamp cartoon that was very famous in the past. The content of the movie that looked entertaining with some funny magical powers of Prabhu Deva and innocent performance of Mater Ashwath got the interest of Zee5 and they brought the rights of this fun-filled fantasy entertainer.

My Dear Bhootam trailer looked very entertaining with the fun ride of kid who met Genie, who can make the wish come true. Though the actor doesn’t have any Telugu releases in the recent past, the movie trailer has bought the enough buzz for the film, that could attract the audience to watch this movie in theatres. After the full run of the movie and on how it fares at the box-office, Zee5 will announce the OTT release date soon.

When is My Dear Bootham OTT Release Date and Time?

Theater, the My Dear Bootham movie will hit the screens on July 15, 2022

Zee5 bought the rights of My Dear Bootham.

Is My Dear Bootham hit or flop?

Not Declared, My Dear Bootham movie has not been released so we can not say Hit or Flop

Is My Dear Bootham Movie available on Netflix?

Is My Dear Bootham available on Prime Video?

Is My Dear Bootham available on Aha Video?

Is My Dear Bootham Movie available on Hotstar?

My Dear Bootham is going to be another remarkable film in Prabhu Deva’s career and the film will hit the screens on July 15, 2022 and has to wait for the OTT release.