Bangarraju Movie Review: Akkineni Nagarjuna and his son Naga Chaitanya starrer Bangarraju movie has been grandly released in theatres world wide on the occasion of Sankranthi festival. On the first day itself it is getting good talk. Audience say that they felt happy to see father and son in one film playing lead roles after “Manam” Movie. Even Critics are giving postive reviews for this movie. Lets know more about this movie. 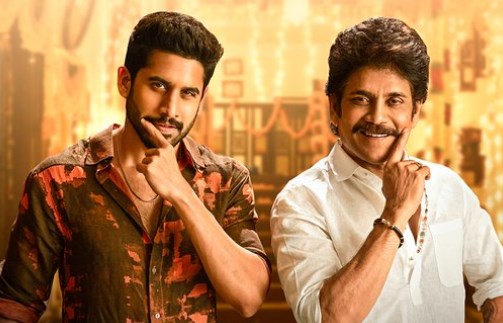 Coming to the Story… Bangarraju is a Super natural family romantic drama. This movie is sequel to Soggade Chinninayana (2016). In Bangarraju Nagarjuna and Ramyakrishna dies but later in spirit form they come to see their son.

Naga chaitanya who plays Chinna bangarraju fells in love with Naga Lakshmi(krithi Shetty). Things change when goons attack them. Story revolves around how Nagarjuna and his wife saved their Sons life. How they able to Protect their son is going to be interesting part of the movie.

Bangarraju is a must watchable family drama. Nagarjuna and Ramayakrishna very well acted as Husband and wife. Music and Cinematography is good. It’s a full entertaining movie in this Sankranthi. Writer and Director Kalyan Krishna Kurasala has worked really hard to give such a good scripts.