Na Peru Shiva 2 Movie Review And Ratings: Na Peru Shiva 2 Movie Starring Karthi in the main lead role has been grandly released in theatres this day on 13th January 2022. This film is the Telugu Dubb of Tamil movie Madras (2014) written and directed by Pa Rajith. It is getting good response from viewers. Na peru shiva may bagg hit in this Sankranthi season though its’ a tamil which got telugu dubbed. 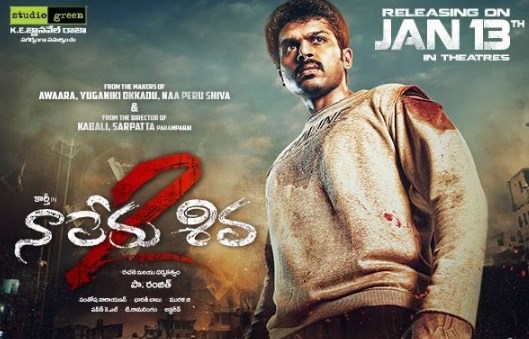 Karthi and his Friend Kalaiyarasan plays the role of best friends. Kalaiyarasan is an Aspiring politician while Karthi is a middle class employee. Whole story revolves around a Wall in thier area. local Politicians of other parties fight for the wall to make their Posters Sticked and Hanged their. Violent fights takes place to own that wall. In this course Kalaiyarasan gets killed and karthi decides to avenge his friends death.

Na Peru Shiva Movie is not a Sequel of Na Peru Shiva (2010). But the role and Character Played by karthi is same as Middle class Man. It’s a Good Political Drama with a New Story. Music is Awesome. Kalaiyarasan very well played the role as Karthi’s friend.