Saakini Daakini Movie Review: Female-centric films are very rare in Telugu and that too two heroines, sounds exciting right?, well-known actors Nivetha Thomas and Regina Cassandra are coming up with an interesting flick called Saakini Daakinin, which is an official remake of Korean film Midnight Runners, well Saakini Daakini trailer grabbed the attention and seem like out and out comedy film with some twists, well the film finally got to release today September 16, 2022, and let’s delve into the in-depth review and find out whether the film is worth watching or not. 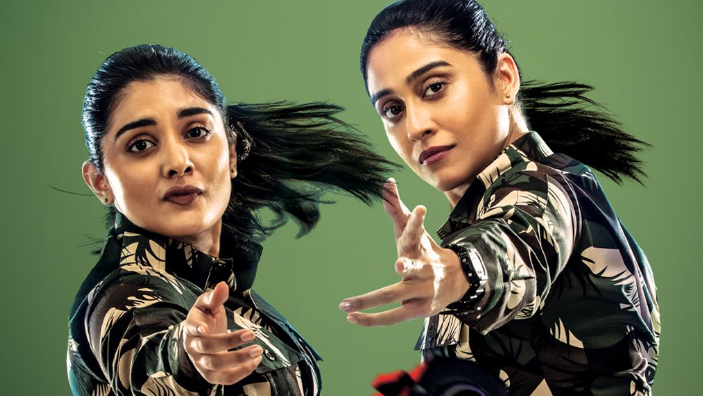 Shalini(Nivetha Thomas) and Dhamini(Regina Cassandra) hail from different backgrounds and both meet at a Police Training Academy, Shalini who is a foody and Dhamini have OCD, unfortunately, the duo shares a room, and in the process of training they fight a lot, However, twist arises in the tale when they witness the kidnap at midnight and finally how did Shalini and Dhamini solve the kidnap case is form the rest of the story.

Saakini Daakini is a clean remake of Midnight Runners and the makers have succeeded in adapting the story as per Telugu audience taste, Though the plot of the film looks very thin, still the film has all the elements that hooked the audience from the start to end. The film starts off well by introducing key characters and the film gets more interesting once the story shifts to the training academy, where the first half engages with comedy and Nivetha and Regina’s chemistry.

The second half is even more interesting once the kidnap happens and Nivetha and Regina’s actions to solve the kidnap case make us engage till the climax, However, the emotional part didn’t land well.

Nivetha and Regina two are well-known and established actors and both have unique styles of acting, coming to this film Nivetha as Shalini is just brilliant as this kind of role is quite new to her, and with a Telangana accent, she effortlessly pulled it off, Regina as Dhamini is also good, her back story is the backbone of the film and she is too good in action scenes, Vennela Kishore and rest of the cast did well.

Sudheer Varma impressed with his debut film Swamy Ra Ra, he is an expert in making crime dramas, and after a long gap he impressed with Super Over starring Naveen Chandra and now he partly succeeded in making this film, the plot should have been even stronger as we look at the film only for comedy them he succeeded in engaging the audience, still, he did justice for a remake.

Technically Saakini Daakini’s good, training scenes were not up to the mark but Richard Prasad showed his experience in night scenes and Mikey Mc Cleary & Naresh Kumaran’s songs didn’t register at all but they impressed with the background score and the rest of the technical team did their best.

Finally, Saakini Daakini is a decent film to watch for those who love comedy.