Naresh Babu Wiki and Biography: Naresh Babu is a Telugu actor, politician, and activist who is primarily recognised for his work in Telugu film and television. His films Parampara (2014), Shatamanam Bhavati (2017), Sammohanam, Naalugu Stamabhalata (1982), Sogasu Chuda Taramaa? (1985), and 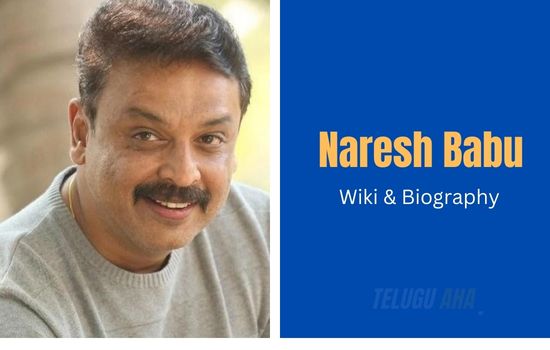 Naresh Babu was born in Chennai, India, on a Sunday, January 20, 1963. His real name is Naresh Vijaya Krishna. He is 59 years old as of 2022. He is a well-known actor and comedian. He was born in the Capricorn sign. Naresh Babu is an Indian from Chennai who went to the prestigious Ramakrishna Mission High School, the Hindu High School, and Padma Seshadri Bala Bhavan for his education.

In the Telugu family drama Pandanti Kapuram (1972), which also starred S. V. Ranga Rao, Ghattamaneni Krishna, Gummadi, Vijayanirmala, and B. Saroja Devi, Naresh played a younger version of himself. Lakshmi Deepak was in charge of making the film. He won an award for his role as the main character in the 1991 DD Telugu serial Munimanikyam Gari Kantham Kadhalu. At the time, it was rare for movie stars to show up on TV, but he did it anyway.

When the movie Pandanti Kapuram came out, it was Naresh’s first time acting (1972). In 1982, the movie Naalugu Stamabhalata was his first role. Later, he played many different roles in Telugu movies, such as Gopi in 1983’s Rendu Jella Sita, Venkat Rao in 1985’s Sogasu Chuda Taramaa?, Gopalam in 1987’s Sri Kanakamalaxmi Recording Dance Troupe, Ramakrishna in 1989’s Hai Hai Nayaka, Siddhartha in 1990’s Kokila, and Nimmagadda Rajeswara Rao Raja
Naresh has been in a few Tamil movies, such as Nenjathai Allitha (1984), Porutham (1985), Malini 22 Palayamkottai (2013), and Sandamarutham (2015).

Naresh played Venkata Rao in the Doordarshan show Munimanikyam Gari Kantham Kadhalu from 1991. Later, as Srinivas, he was in a number of TV shows, such as Popula Petti (1996) on ETV, Amrutham Icchapurapu (2002) on Gemini TV, Maa Nanna (2012) as Sivaiah, Mahalakshmi Nivasam (2013) as Viswanatha Raju, and Oka Chinna Family Story (2012) on Zee5.

In 1996, Naresh Babu got his start in politics by running a campaign for the Indian National Congress. In 1998, he joined the youth wing of the Bharatiya Janata Party (BJP). Then, he moved up in the BJP to become the state president, secretary, general secretary, and vice president for Andhra Pradesh. Naresh worked for the Rayalaseema Adyayana Committee as a coordinator. He ran for the BJP in Hindupur, which is in the Anantapur district. In 2009, he stopped being a member of the main party.