Meenakshi Chaudhary Movies List in Telugu 2021: Tollywood always welcomes new actors and encourages aspiring filmmakers. However, one should have luck along with talent. Meenakshi Chaudhary is one who has both luck and talent along with passion. She has own many beauty contest titles like Miss Grand International 2018 beauty pageant runner-up title, Miss Grand at the Femina Miss India 2018 pageant, etc. She discovered her passion to act and decided to test the waters in the glamour field. 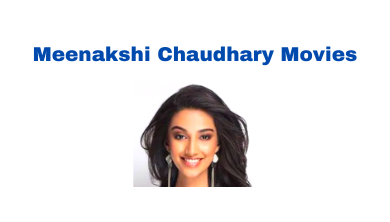 Her debut Telugu film Ichata Vahanalu Niluparadu scheduled for a grand release in 2021. Meanwhile she also grabbed an opportunity to star opposite to Ravi Teja in Khiladi. Let us have a look into the Meenakshi Chaudhary Movies List in Telugu and other languages.

Meenakshi Chaudhary childhood dream was to step in the glamour field. So, she had entered into modelling. After having some experience in the modeling, she started getting several offers.  Since she has come from a family of government servants, so never has an idea about showbiz. But she slowly and steadily fell in love with the camera and started balancing my modelling assignments with my studies.

Ichata Vahanalu Niluparadu is the debut film for Meenakshi Chaudhary in Telugu. Moreover, she is facing the camera for the first time with a Telugu cinema.

Her next flick Khiladi is on cards. Ravi Teja is playing the lead role while Meenakshi Chaudhary and Dimple Hayathi playing the female lead role.

She did her Tollywood debut opposite Telugu actor Susanth in Ichata Vahanalu Niluparadu. Following this she also placed opposite to Ravi Teja in Khiladi and more movies have to come. Tollywood has introduced many talented actress to the cine world, many Bollywood leading actress have started their journey from Telugu movies only. In order to keep a hold in the industry language plays an important role. So she enrolled in workshops to familiarise with the Telugu language as well.