Vidya Vasula Aham Movie OTT Release Date: Rahul Vijay, who is son of fight master ‘Vijay’ is trying to make his mark as an actor with different movies in Telugu, but he was not able to score a big hit in Telugu as of now with all his films that got released in Telugu. Rahul Vijay is now coming with another project titled ‘Vidya Vasula Aham’ and the first glimpse of this movie has released recently. 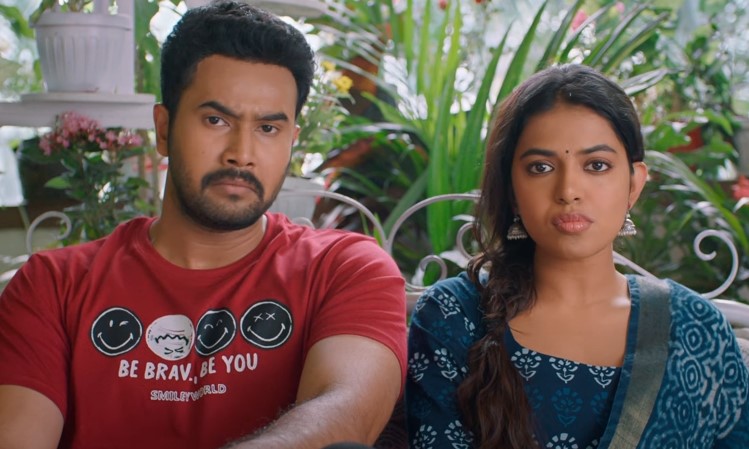 Vidya Vasula Aham is story of a young couple Vidya and Vasu, who make their relation more complicated with their ego. Movie revolves around these two characters and the situations that arise between due to ego. Movie focuses on present day relationships, where people are impatient and filing divorce for silly reasons.

Vidya Vasula Aham movie stars Rahul Vijay & Shivani Rajashekar in the leading roles, other cast of the film is yet to be announced. This movie is directed by the debutant Manikanth Gelli and produced by Lakshmi Navya Moturu & Ranjith Kumar Kodali under Eternity Entertainment Banner. Music is composed by Kalyani Malik and cinematography is handled by Akhil Valluri.

Shivani Rajashekar is working in multiple projects in Multiple languages like Telugu, Tamil. She is playing the role of Vidya from this movie and her character is representation of a modern day women who works for a private company and looks after household work as well. Movie makers are planning for a theatrical release and haven’t revealed the details about the satellite & digital rights yet.

Rahul Vijay’s Kudi Yedamaithe series has received applause from critics and he was appreciated for portraying the role of a door delivery boy naturally. In this movie, he will be seen in the role of Vasu, the lovable & caring husband. Hope this movie brings him the success he is waiting for. As movie is aiming for a theatrical release, OTT release date will only be announced after the theatrical run.

Vidya Vasula Aham movie team haven’t released the trailer yet. You can watch the glimpse below.

When is Vidya Vasula Aham OTT Release Date and Time?

Not Declared, Vidya Vasula Aham movie makers have not yet announced.

Theatres, Vidya Vasula Aham might hit the screens in November 2022.

Not Declared, Vidya Vasula Aham movie makers have not divulged yet.

Not Declared, Vidya Vasula Aham movie has not been released so we can not say Hit or Flop

Vidya Vasula Aham is a romantic comedy film starring the talented Rahul Vijay and Shivani Rajashekar in the leading roles. This film is surely going to a fun ride to watch.