Veyi Daruveyi Telugu Movie OTT Release Date: Sairam Shankar who is mostly known as Puri Jagannadh’s brother. He worked as an assistant director under his brother and his first screen appearance was Idiot which was released in 2002. After 2 years he made his debut as a lead actor in the film called 143 helmed by Puri Jagannadh and which was a musical hit composed by Chakri, after the success he did many films and created his own identity, however, he announced his new project called Veyi Daruveyi. 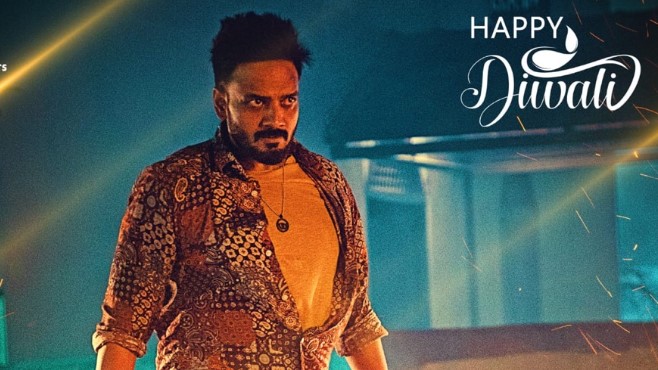 Veyi Daruveyi movies have launched officially with a simple pooja ceremony and Sharwanand, Allari Naresh, Vishwak Sen, and Akash Puri have graced the event and extended their wishes. On the occasion of Christmas Veyi Daruveyi, the makers have released the first look and in the first look, Sairam Shankar’s ferocious looks are quite impressive as it seems this film has solid action blocks.

Veyi Daruveyi makers haven’t divulged what the story is about but Sairam Shankar said during the launch, after Bumper Offer movie this film is my type of film it suits for body language. The film is an out-and-out commercial entertainer with Sairam Shankar’s mark.

Sairam Shankar plays the main lead and Yasha Shivakumar plays the female lead the film also features Kasi Vishwanath and Posani Krishna Murali, Naveen Reddy is the director of the film, Sathish Muthyala is the cinematographer, and the film Produced by Devaraj Potturu under the banner of Shankar Pictures.

Sathish Muthyala will be taking care of cinematography, and his latest work was Adi Saikumar’s Black and he did films like Manchu Manoj’s Current Theega, Manchu Vishnu’s Dynamite and Rowdy, Allari Naresh’s Bangaru Bullodu and Sumanth’s Mallirava.

Veyi Daruveyi is an out-and-out commercial flick and the film is under production right now, the next schedule will be at Vizag for about 15 days then the team will back to Hyderabad and wrap the shoot with the final schedule, and immediately it will move into post-production. Sairam Shankar seems super confident about the script and he is hoping to bring success.

After the blockbuster of his debut film 143, he did back-to-back films, and he enjoyed success for 6 years, after the blockbuster success of Bumper Offer he started tasting the downfall with back-to-back films. He did almost 9 films till 2018 his last film was Jagadamba and currently he trying to bounce back, and he is been busy with Oka Pathakam Prakaram which is under post-production now meanwhile he has announced his next flick called Veyi Ddaruveyi apart from these there is a rumor around going on that his blockbuster film Bumper Offer sequel might be announced soon. Stay connected to know updated information about the film.

Talking about the Veyi Daruveyi digital rights, as of makers haven’t even announced the theatrical release date and it’s too early to announce all the information. well stay connected with us and we will update you.

Kannada heroine Yasha Shiva Kumar plays a female lead and she was last seen in Monsoon Raagasstarring Dhananjay which was an official remake of Telugu film C/O Kancherapalem and she was also part of Shivarajkumar’s Bairagee helmed by Vijay Milton. However, she is making her Tollywood debut with Veyi Daruveyi and she expressed her excitement during the launch.

Talking about the Veyi Daruveyi OTT release date hasn’t been announced by the makers because it’s too early to announce the film is under production now. We can expect the OTT release date after the theatrical release until then stay connected with us we will update you once we get the official confirmation.

Veyi Daruveyi is currently under production and it will take some time to drop the trailer, we will upload it here once the makers are officially released it.

Not Declared, Veyi Daruveyi movie makers have not yet announced.

Theatres, Veyi Daruveyi will hit the screens in mid-2023. The official theatrical release date of this movie is yet to be announced by the makers.

Not Declared, Veyi Daruveyi movie makers have not divulged yet.

Not Declared, Veyi Daruveyi movie has not been released so we can not say Hit or Flop

Veyi Daruveyi is billed as a commercial action entertainer. The film has created some buzz since its launch and one of the reasons is Sairam  Shankar’s speech as he said that this film is going to be like Bumper Offer as it has Action, Comedy, and Emotions that will surely entertain the audience. Sairam Shankar seems super confident about the film as he is hoping that he will surely bounce back with this film and let’s hope.