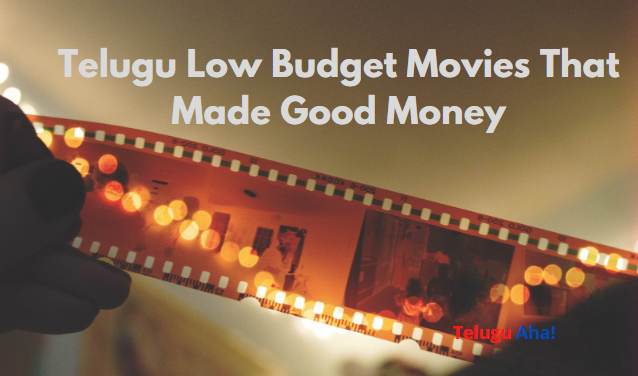 We have sorted the list of low budget movies which made good profits and great appreciation from audience. Low budget films dealing with never-tried-before concepts, genres and stories become more successful in Tollywood when compared with regular action films. As a special article, here are the 7 Telugu Low Budget Movies That Made Good Money.

Released on March 25, 2021, Jathi Ratnalu is the complete entertainer which gained a huge response from the audience across the globe. Reportedly Jathi Ratnalu has made more than Rs.75 crore gross collection and it is the first Indian movie to collect more than $1 million gross at Overseas in 2021.

Though the movie has debut lead actors and debut director, Uppena is one of the small film with medium budget. The movie is made with Rs.22 Crore starring Vaishnav Tej, Krithi Shetty and Vijay Sethupathi in lead roles. Touted to be a romantic movie Uppena, based on the honor killing, which is helmed by Buchi Babu Sana, and bankrolled by Mythri Movie Makers.

Agent Sai Srinivas Athreya Movie completed its run with over Rs.8 crore share at Box Office, movie budget was around 3 Crore. It was the first Blockbuster ad successful film for Naveen Polishetty in lead role. Moreover, this movie has opened business for Naveen Polishetty movies in Overseas market.

Starring Sree Vishnu, Nivetha Thomas, Rahul Ramakrishna and Priyadarshi in lead roles, Brochevarevarura (2019) is one of the small budget film with big success. The comic thriller again proved that you don’t need high budgets to pull off profits.

Adivi Sesh once again proved with versatile thriller film “Evaru” after Kshanam (2016). This is the Telugu adaption of Spanish film ‘The Invisible Guest’ performed exceedingly well at the box-office and besides the spectacular performances of Sesh and Regina Cassandra. Debut director Venkat Ramji did a commendable job when it came to packing a punch with a brilliant screenplay and keeping the viewers’ guessing till the end.

Kshanam is the 2016 crime thriller mystery starring Adivi Sesh in lead role. It was the biggest hit films of Tollywood that made with a very low budget. However the movie has made around Rs.12 Crore at Box Office. With the success the movie is remade in Bollywood and other Indian languages.

Run Raja Run is the 2014 comedy thriller starring Sharwanand, Seerat Kapoor, and Adivi Sesh in the lead roles. It is also one of the biggest hit films of Tollywood that made with a very low budget. Reportedly the movie is made with a budget of Rs.4 Crore at Box Office and made 15 Crore.