Harom Hara Movie OTT Release Date: One of the most underrated actors Sudheer Babu in the lead has been titled ‘Harom Hara’ this film marks Sudheer Babu’s 18th film, recently makers have dropped a conceptual video and it looks quite interesting and created curiosity and also the title has a tagline called ‘The Revolt’, However, the film is directed by Sehari fame Gnanasagar Dwaraka and Produced by Sumanth G Naidu. 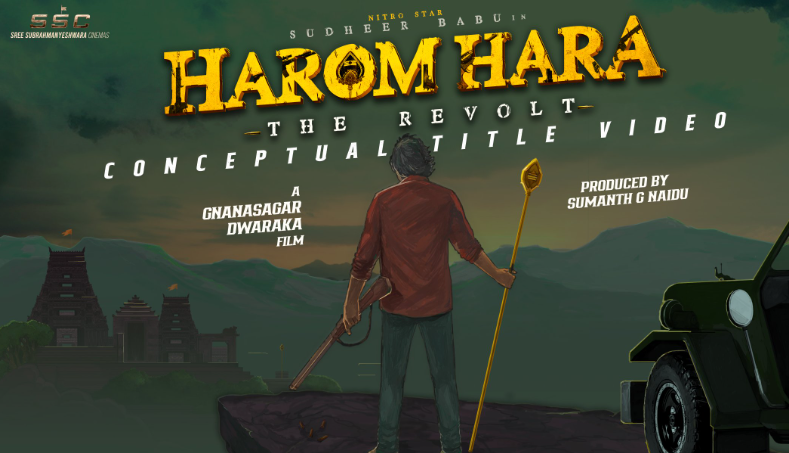 Harom Hara makers haven’t divulged what the story is about as we go by conceptual video, the story is set in 1989 in Kuppam of Chittoor district. it also shows Popular places such as Subramanya Swamy Temple, Jagadamba Talkies, and a railway station, all of these are probably connected to the story.

Sudheer Babu playing as Subramanyam and the rest of the cast is yet to be announced, the film is directed by Gnanasagar Dwaraka, while the camera cranks by Aravind Viswanathan, Music will be taking care of Chaitan Bharadwaj and the film Produced by Sumanth G Naidu under the banner of Sree Subrahmanyeshwara cinemas.

Harom Haro will be Sudheer Babu’s first Pan India film as the main lead and the film will be shot in Telugu and dubbed in multiple languages like Tamil, Kannada, Malayalam, and Hindi)

Sudheer Babu has a solid lineup his recent flick Aa Ammai Gurunchi Meeku Cheppali didn’t fare well but a few films like ‘Hunt’ and ‘Mama Mascheendra’ are getting ready to create havoc at the theaters and now he is back with another interesting flick called Harom Hara, looks like the film is a revenge story and Sudheer Babu will be seen in a never before avatar. However, the film’s details like the release date and who acquired digital rights details will be divulged very soon, till then stay tuned with us.

Gnanasagar Dwaraka stated that the film is apt for Sudheer Babu and the film does not just give spiritual importance and the film will give equal importance to action as well, well this film will be a visual feast for Sudheer Babu fans, however, it’s too early to announce the OTT release date and the regular shoot will commence in November, stay tuned with us to know regular updated about the film.

Harom Hara trailer has not been released by the makers but they have dropped a conceptual video you can have a look at here.

When is Harom Hara OTT Release Date and Time?

Not Declared, Harom Hara movie makers have not yet announced.

Not Declared, Harom Hara movie makers have not divulged yet.

Is Harom Hara hit or flop?

Not Declared, Harom Hara movie has not been released so we can not say Hit or Flop

Harom Hara is billed as a revenge action entertainer set in 1989.