Rajashekar Wiki and Biography: Rajasekhar is a well-known actor in Indian movies. He was born Rajasekhar Varadharajan on February 4, 1962. He usually plays Telugu characters, but he has also acted in Tamil movies. Dr. Rajasekhar is an actor who works in Tamil and Telugu movies. He is also known as “Angry Young Man.” The character he plays called “Angry” has become his trademark. During his more than 30-year acting career, he played many different types of people. 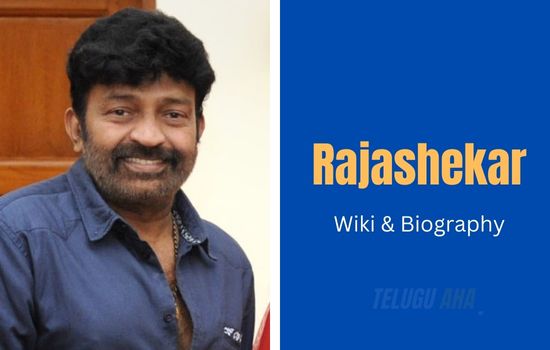 Anna was shown for the first time anywhere in the world at the International Film Festival of India. Rajasekhar won the Telugu Filmfare Award for Best Actor twice for his roles in the movies Anna and Magaadu. During his career, he has been in more than 75 movies.

He was born in Lakshmipuram, Theni District, Tamil Nadu, to Andalu and D. C. Varadharajan, a retired police officer. His brother Selva was also important in the Tamil movie. After getting his M.B.B.S., he worked as a doctor in Chennai before moving to Hollywood. As a young man, he went through something that changed his life. After that, he decided to follow the teachings and practises of the Shaiva sect of Hinduism.

Rajasekhar is an actor who works in Indian movies. Rajasekhar’s first movie was the Tamil film “Pudhumai Penn,” which came out in 1984. Tamil and Telugu are the main languages he uses in the movie business. Rajashekhar’s first movie in Telugu was called Vande Mataram, which came out in 1985. Since then, he has been in many movies, including Pratighatana, Repati Pourulu, Station Master, Shrutilayalu, Kashmora, Aradhana, Talambralu, Aruna Kiranam, Mamatala Kovela, and Akka Mogudu.

His later family dramas, including Ma Ayana Bangaram, Suryudu, Simha Raasi, Ma Annaya, Deergha Sumangali Bhava, Manasunna Maaraju, and Gorintaku, also received a great deal of praise. The reviews of the love story Allari Priyudu, in which he played a lead role, were also good. Na Style Veru, his attempt at comedy, was well received by the general public.

He is a skilled performer who can do a lot of different things well. Upendra’s Kannada movie Omkaram shows off his acting skills. His work in the movie Sheshu was praised very highly. “Avadaithe Nakenti,” which came out in 2007, was his biggest commercial hit. “Gorintaku,” which came out in 2008, was his last big hit. Since then, he hasn’t had much luck in that area. His last movie came out in 2015, and it was called Gaddam Gang.

“Idthu thaanda police,” which he made in Tamil, was a big hit. He then got offers to be in more Tamil movies. Movies like “Meesaikaran,” “Mannikka Vendugiren,” “Aambala,” “Diyaal,” “Akka,” and others made his name well known.