Mickey J. Meyer Wiki and Biography: Mickey J. Meyer is a well-known Indian composer who focuses on making music for movies in the Telugu language. Meyer’s first movie was Pothe Poni, which was in the Telugu language. He has written the music for many movies, including Happy Days (2007), Kotha Bangaru Lokam (2008), Leader (2010), Life is Beautiful (2012), Seethamma Vakitlo (2013), Sirimalle Chettu, and A Aa. Meyer has won both the Filmfare and Nandi Awards for Best Music Direction. 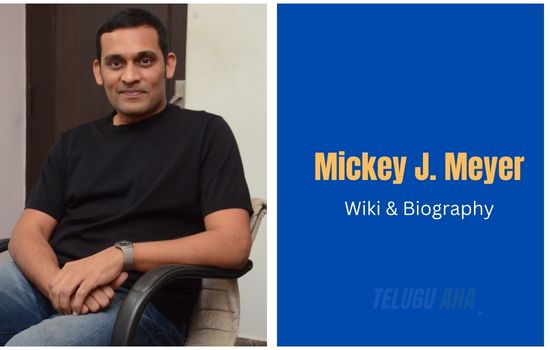 While he was in Hyderabad, he went to school at St. Mary’s College in Himayatnagar. Mickey J. Meyer learned to play the violin and piano when he was a young child. The Karnatic tradition of music is something he knows about. After he finished fifth grade, he got into the prestigious Trinity College of Music in London.

Mickey J. Meyer was born on November 30, 1982, in Hyderabad, India, where he also grew up. In the same way, he completed an eight-year music program and got his degree in 2002. Mickey J. Meyer was completely taken in by the song, and he blames A. R. Rahman as the artist he has listened to the most over the course of his life. Because of this, Sekhar Kammula hired him for the movie Happy Days. He was called the best music director of all time.

In 2005, Pothe Poni, a Telugu movie, was his big break. Tenth Class and Note Book, which also did well, cemented his place in the business. Mickey made music for the 2007 movie Happy Days, which was directed by Sekhar Kammula. The movie’s soundtrack kept selling well for a long time after it came out, setting new standards for popular music. Mickey was able to get a good start in the tollywood music business because of how well the album did. The record was given a lot of praise and awards.

Mickey’s third movie, Kotha Bangaru Lokam, was also a big hit, and he was nominated for another Film Fare award for his work on it. At that time, Mickey’s music had already made it to towns and villages in southern India that were a long way from each other.

His music stood out among the fast-paced, pulsing songs that were popular in the movie business at the time. Mickey became well-known on campus quickly as his music became a staple at college parties and events. Over the years, Mickey has been a part of many albums. The most recent one was the Leader soundtrack, which came out in 2010. Critics liked Leader’s music and gave it good reviews.

Soon after Leader came out, Mickey’s father got sick. Mickey had to make the hard choice to put his career on hold so he could care for his father until he died in 2011. Mickey played Mickey in the 2012 movie Seetamma Vakitlo Sirimalle Chettu, which was directed by Srikanth Addala and also starred Venkatesh and Prince Mahesh Babu. In 2010, Mickey and his wife Sharon, who was born in the United States, moved to Hyderabad.