Aha Na Pellanta Web Series Review: Raj Tarun who impressed with his acting and body language on Big Screen but over the years he didn’t get success, then he switched to OTT and come up with a series called ‘Aha Naa Pellanta’ directed by Sanjeev Reddy, the series trailer has grabbed the attention with stellar cast and comedy, well the series finally premiered in Zee5 today, let’s dive into the review and find out whether the series worth watch or not. 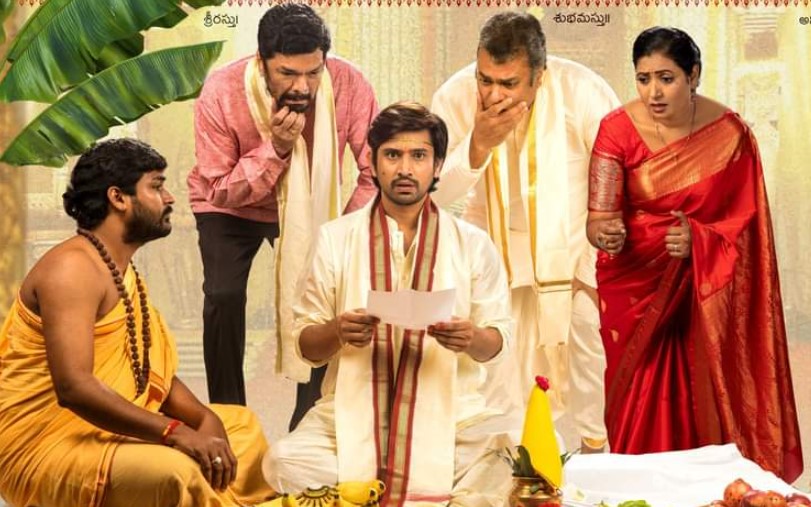 Aha Naa Pellanta series depicts the life of Seenu(Raj Tarun) who is a chill and easygoing guy but since his childhood, he vows to his mother to not see any girl til the time he gets married, because his mother says if he sees any girl his father Narayana(Harhsvardha) gets injured, However, as growing Seenu couldn’t control his feelings but he tried to avoid girls but finally when the time comes to get married, here the twist arises in the tale when the bride elopes with her boyfriend, Finally, What was Seenu’s decision? will Seen bring back his bride? is forms the rest of the story.

Showcasing the lives of middle-class people is always fascinating on-screen and Aha Naa Pellanta is a series about middle-class lives,  you can experience all kinds of emotions throughout the series, as the series takes time to get into the story and we can see the character’s introduction and plot establishment in the initial episodes, though the screenplay dips here and there the first 4 episodes engage you with the right amount of comedy, once the Seenu’s fiancee elopes with her boyfriend then the series turns out as a regular story that hero decided to go on a search for the girl.

In the process of searching for his girl, he lands at Hyderabad there again story takes a back seat and comedy comes front seat and almost 2 episodes we can see just comedy which makes no sense in no way related to the story and it looks silly when Seenu forgets about his girls and making fun. The series becomes serious when Seenu fell in love with Maha and gets interested after Seenu accidentally involves in Maha’s situation.

The series has all the elements to engage a normal viewer and if you forget about the story you will engage with the series with comedy, the has many flaws as well, the core emotion is neither loud nor dramatic but it could have been much better so that the viewer might connect even better with the story. it’s all in your hands if you skip draggy and lengthy scenes then the series serves you the right amount of comedy.

Talking about performances, Raj Tarun as Seenu is, as usual, good, Seenu’s character is not challenging character for Raj Tarun, as we have seen him doing the same type of acting on the big screen but he showed subtleness in his performance, Shivani Rajshekar as Maha is good and she impressed with her performance, Harhavardan as No ball Narayana is phenomenal he wins many hearts with his natural comic timing, and Amani, Posani Krishna Murali, Getup Sreenu shines in their respective roles and rest of the cast did well.

Sanjeev Reddy has come up with a relatable subject and though there are flaws in the writing, although he pulled it off with a comedy and made you glued to the screen, however, the story should have been written much better rather than writing a good comedy.

Technically, Aha Naa Pellanta is good, but Nagesh Bannell, and Ashkar Ali’s cinematography is not up to the mark, and Judah Sandhy’s music is good his background score suits the mood, and the rest of the team did well.

Overall, Aha Naa Peallanta is a roller coaster ride with many emotions but your ride will fulfill with only comedy.