Tollywood Number 1 Hero: All over the world in any industry, the films will run on Hero, which means 90% of the movies have been made Hero centric film and they have the ability to bring all kinds of audiences to the theatre. coming to the Telugu heroes there are many heroes in Telugu, all the heroes are doing well and trying their best. 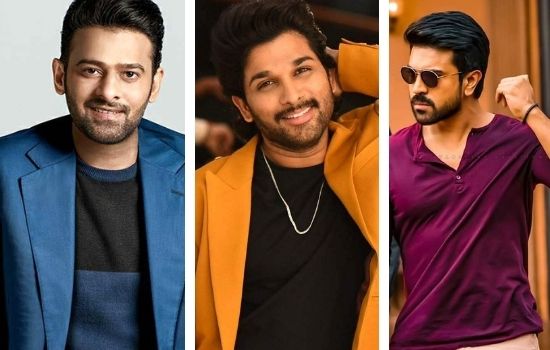 over the years there has been a topic going on in the industry, who is no 1 hero. right now it is very difficult to tell, however, to say no1 it needs a lot of things into consideration. I think audiences decide on the hero’s remuneration and how much their film will collect. so here in this article, you can get the Top 10 heroes in Tollywood.

Prabhas is the No.1 hero for many reasons, before Bahubali he was a medium-range hero, however after the Bahubali entire scenario has changed and even after Bahubali 2 his stardom crossed India. now he is been making some of the largest films in India and also he is the highest-paid actor in Telugu.

Allu Arjun is the most versatile actor, in my opinion, after the Parugu movie his acting skills have changed from there he is been changing himself for every movie. Now he made Pushpa and we all know how brilliantly performed he was.

Ramcharan has got immense popularity in a very less time, Magadheera has changed his career and he has also with every he is been trying to establish himself with a new version, and ow he delivered one of the finest performances in RRR.

Jr.NTR is one of the finest actors in Tollywood and everyone knows about his acting ability. he delivered one of the best performances in RRR, after RRR he has some crazy pipeline.

Pawan Kalyan has an immense following no matter his film Hit or Flop his fans worship him. and he bagged a blockbuster hit with Bheemla Nayak.

Nani is one of the most underrated actors in the Telugu film industry. His selection of films will shock everyone, he is coming with Ante Sundaranuki very soon.

Rana Daggubati has no language barrier, he can do any film in any language, he is currently doing a web series called Rana Naidu with his uncle Venkatesh.

Vijay Deverakonda has less filmography though his popularity is unmatchable and he is currently doing a film called Liger under the direction of Puri Jagannadh.

Naveen Polyshetty is the youngest hero in Tollywood and we all know about his brilliant comic timing with Jathi Rathnaalu and who sets up a massive pipeline.