One of the renowned production of Tollywood Mythri Movie Makers is coming up with the two biggest films Chiranjeevi’s Waltair Veerayya and Balakrishna’s Veera Simha Reddy. Since Prabhas’s highly anticipated film Adipurush has been ruled out of the Sankranthi Race, all eyes are on these two films, and fans and moviegoers are eager to see who will emerge victorious. 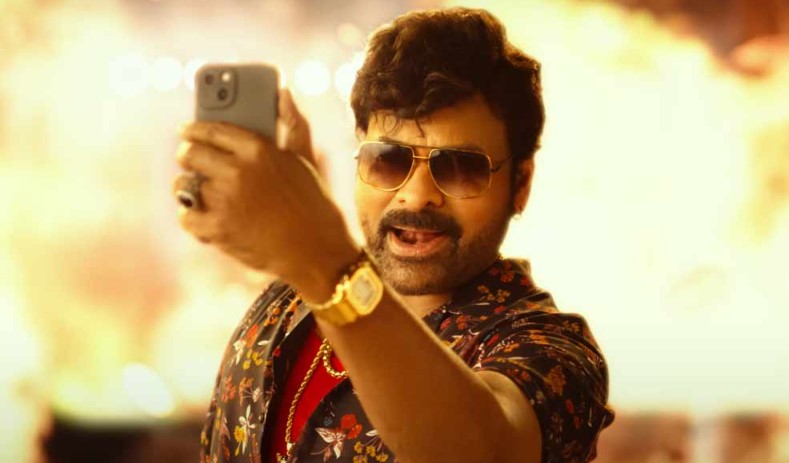 The makers haven’t officially divulged what the plot is about, but there are speculations going around about the story that Satyaraj, who is playing a father role, had two wives, one in Telangana and another in Andhra Pradesh; interestingly, Raviteja playing a police officer called Vikram Sagar who is a son of Telangana wife and Veerayya is a fisherman who is a son of Andhra Pradesh based wife and she is also a leader of port workers association.

Chiranjeevi plays the lead role, Ravi Teja playing an important role, Shruti Haasan plays the female lead, Catherine Tresa, and others, and  K.Ravinder(Bobby) is directed the film while Arthur A Wilson is the cinematographer, Music has done by Devi Sri Prasad and Naveen Yerneni and Y Ravi Shankar are the producers under the banner of Mythri Movie Makers.

Talking about other technicians Editing has done by Niranjan Devaramane, Production Design taken care by by AS Prakash, Fights by Ram-Lakshaman, Kona Venkat and K.Chaakravarthy Reddy are the Screenplay writers , Additional writing has done by Hari Mohana Krishna, Vineeth Potluri, DI done by Annapurna Studios under the supervision of Vivekanand.

Waltair Veerayya is going to hit the screens on January 13, 2023. Waltair Veerayya full movie you can watch online after the theatrical release and makers havent revelead the OTT platform name as we can exepect all the details after the theatrical releaase but as per our sources big OTT platforms have been trying to acquire the digital rights and after the 45 days of theatarical run makers will reveal the OTT name, digital rights price and OTT time untill then, stay tuned with us.

Waltair Veerayya makers have not been released the trailer yet as the promotions had began by releasiong first look teaaser, songs and ‘Boss Party’ has became a charbuster. After watching the teaser and chiranjeevi’s look fans and cinephiles have been waiting for the trailer and the film is going to release on January 3, 2023 as we can expect the trailer to be released in the first week of January.

Chiranjeevi’s previous film Acharya was maade with a budget of 110 crores unfortunatley the film registered as a disaster. Despite the flop of Acharya Waltair Veerayya makers havent compromised in making a lavish film and they have spent a whooping budget of 140 crores. Waltair Veerayya’s theatrical business has done with an impressive number as it seems the flop doesnt affects his upcoming film and critics are hoping that Waltair Veerayya opens a solid number on the first day of it’s release, fingers crosses and let’s see who will win the battle.

Waltair Veerayya is going to hit the screens on January 3, 2023 and the films expectation are touched the sky and one of the reasons is Chiranjeevi’s vintage look as it reminds his iconic film Muttaa Mestri. However, his last film Acharya has got poor IMDb ratinf of 3.8/10 but Waltair Veerayya seems quite promising in every aspect and we can expect some solid ratings and after the release with in 1 hour people are deciding the movie hit or flop so we just have to wait for few more days to know.

The action entertainment Waltair Veerayya is described as featuring vintage Chiranjeevi. Since Ravi Teja’s trailer was released, anticipation has increased twice. The movie will be released on January 13, 2022, so get ready for the mass celebration.