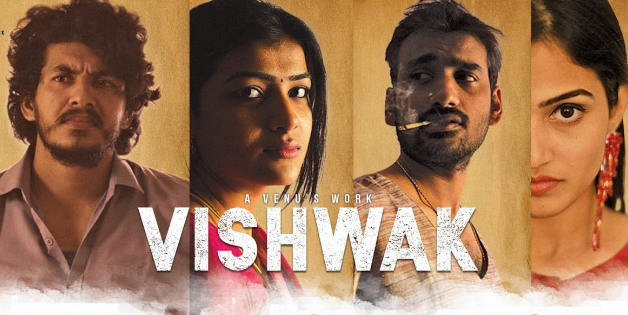 Generally, small films need a lot of promotions to grab the audience s attention otherwise movie will never stand out in the theater, Vishwak trailer got a lot of attention but makers didnt use that opportunity for their promotions, maybe that is the reason a lot of people are unaware of this movie. Vishwak movie getting decent talk that the story and dialogues worked out well. let us see how this small movie turned out to be good.

Vishwak is a carefree guy who lives with his parents and his parents want him to settle in America but he wants to settle in India, However, his father offers him 25 lakhs for the US but he decided to start a business in India with that money but things turn different when Vishwak realizes about most of the youngsters are willing to leave India and wants to settle in America. However, he wants to create employment for youth and make India proud. Finally, will he achieve his goal? will youth stop thinking about going to America? what challenges Vishwak faced and how Vishwak changed a lot of youngsters’ lives is the rest of the story.

Vishwak movie starring Ajay Kathurwar played as a protagonist and he has done well in the film, his dialogue delivery and body language was suited for the character. and Dimple as a female lead as she didn’t get much scope to perform but she added value to the film. and this movie directed by Venu Mulkala, Produced by Thatikonda Anandam Bala Krishna, Cinematography handled by Pradeep Dev, Music composed by Satya Sagar Polam, Edited by K.Vishwanath and movie was produced under the production of Golden Duck Productions.

Vishwak movie addressed how youth struggling for their employment in India, how families putting pressure on their children’s to go to America and why some section of youth want to go to America, and why NRIs are not taking part in their own country development, these are the points nicely addressed in the film which helped out to the movie talk and finally the movie is worth watching and it is made for youth.