Virata Parvam Movie Review: Virata Parvam is a much-antciapated movie in Telugu as the film raised a lot of expectations and is one of the reasons for the stellar cast, However, Rana has created a separate fan base, and all the fans and movie lovers jas an idea that he never do regular commercial films, in addition, Virata Pravam never look like commercial film and that grabbed the attention, moreover, after the trailer, it raised 10times more expectations and with this humongous craze and expectations the film has finally released in the theaters today June 17, 2022, and the response is unimaginable as the film has been getting immense positive response from the audience as well as critics, well without any delay lets delve into the in-depth review and let’s know whether the movie is worth watching or not. 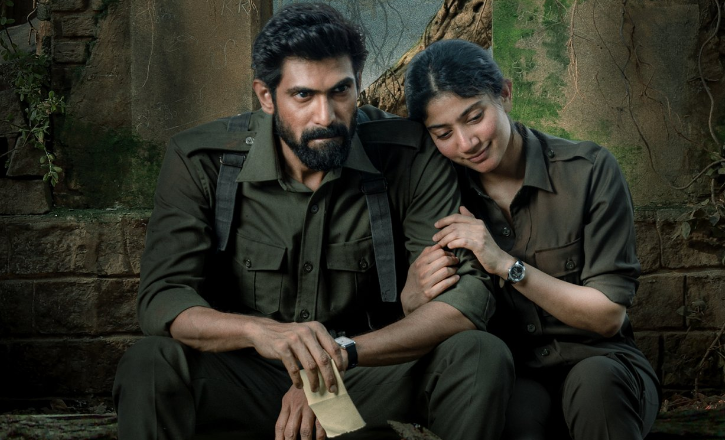 Virata Parvam starts with Vennela(Sai Pallavi) who was born in Khammam, her family belongs to the communist ideology as she grows up with the same ideology and decided to join the communist party, on the other side Ravi(Rana Daggibati) who is Doctor by profession in a small village in Warangal and he also has communism in his blood, However, being a doctor he stands Oval to the people and fights against landlords for exploitations but with some unexpected incident, he becomes a Naxalite and in the process he finds his hidden talent and starts writing poetry with the name of Aranya and Vennela fell in love with his poetries and she starts her journey to meet him, finally, Why Ravi became Naxalite?, is Vennela meets Ravi is the rest of the tale.

Virata Parvam is one of the most well-written stories in recent times as we have seen many films in Naxal’s backdrop but what made Virata Paravam is different is the perspective, the film story entirely focused on the journey of Vennela, as the makers have already said that her character based on real life, and you will surely fell in love with Vennela character.

However, the movie starts off well by introducing Vennela’s world later the story shifts to Ravi’s world as the story gets interesting with key characters’ introductions and the director sets up the conflict very early and that worked out well, the first half went well with brilliant scenes as every scene helps in moving the story forward and the interval bang is the heart of the second half.

The second half treatment is quite a contrast to the first half as it mostly focuses on the emotional journey of Vennela and also very realistically addressed the social issues, and all the emotions and conflict land well at the climax and the turned to be a great film.

Raana as Ravi is just brilliant as we haven’t seen him before in this type of role but he effortlessly pulled it off, as the most dignifiedly written character, Ravi character has a lot of shades as he has to emote all the emotions and if that emotion looks artificial then the audience will disconnect ruthlessly with his character but he brilliantly emoted every emotion on screen and Sai Pallavi as Vennela is speechless, without Vennela the film wouldn’t have existed, so brilliantly written charter and she portrayed it so nice as her character demands intense performance and she effortlessly delivered we can see the brilliant writing in character as we can nuances of Vennela and that captured so beautiful, and Priyamani as Bharathakka she jas justified her role and Naveen Chandra has got a good screen presence as he proved once again how brilliant actor he is and rest of the cast did their part well.

Venu Udugula has proved himself as a great writer with his first film called Needhi Naadi Oke Katha, but Virata Parvam is in complete contrast to his previous film, despite the fact he delivered one of the finest intense and realistic films ever made in Telugu, his writing, and his dialogues move you emotionally and make you think in a lot of scenes, and it’s not easy to create almost 8 to 10 key charters and every character has a backstory, as a director he succeeded in engaging the audience, he makes you sit 2 and half hours, kudos for the writing this kind of story as it is not a Naxals movie he showcased the exploitation of villagers and Naxal’s revolution in a subplot and the main plot is Vennela, that’s the best part of the film.

Technically Virata Parvam looks top notch and Dani Salo, Divakar Mani’s cinematography is one of the major highlights of the film Suresh Bobbili’s songs and background score are brilliant and the rest of the technical departments did well as per the requirement of the film.

Finally, Virata Pravam is one of the best intense and realistic films in TFI, and undoubtedly the film is a must-watch film for everyone, go watch it in near theaters.