Vikrant Rona Movie Review: Most awaited Kannada movie “Vikrant Rona” starring Kichcha Sudeep is hitting the theatres today. From the trailer the movie looked visually wonderful and has the grandeur just like the KGF movie. A special song starring Jacqueline Fernandez made this movie more special with top stars of respective industries backing this project. Let’s get into the in depth review of the movie and find out if this movie is worth watching. 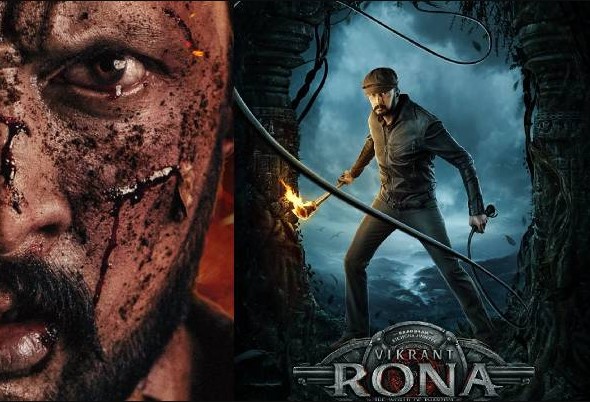 A remote village in the middle of a tropical rainforest begins to witness a series of unexplainable events that they attribute to the supernatural nearly half a century ago. This coincides with the arrival of Vikrant Rona, an eccentric police officer. A mysterious game is being played in which everyone in the village is both a potential victim and a suspect.

Movie stars Kichcha Sudeep, Nirup Bhandari, Neetha Ashok in main roles, while Jacqueline Fernandez is doing a cameo. Movie is directed by Anup Bhandari and made under the production of Jack Manjunath, Shalini Manjunath. Music is composed by B Ajaneesh Loknath, William David is handling the camera and editing is handed over to Ashik Kusugolli.

Vikrant Rona has all the elements that could entertain the audience. But the story of the movie is very similar to that of many commercial  movies that came in the past and this story line will surely attract the mass audience, as it has all the elevations needed for the lead character. Kichcha Sudeep fans will be elated with the kind of elevations that were given throughout the movie. However, other than fans the movie may look a little boring for the normal audience though the movie has all the elements in the right place. “Ra Ra Rakkamma” song will be a treat to watch on the big screen.

Kichcha Sudeep as fearless and daring Vikrant Rona will steal the show with his performance and dialogue delivery. Nirup Bhandari as Sanjeev Ghambira is decent with his looks and performance. Neeta Ashok as Aparna has limited screen presence, yet makes her mark with very few scenes. All the other actors in the movie did a decent job as needed.

Technically movie looks very grand. Production values are high and seems like producers have given enough freedom to the director to bring out the best. Cinematography by William David is major highlight. Every frame looks good and the DI added made it look like a Hollywood movie during some shots. VFX could have been better. B Ajaneesh Loknath Music and background score were okay and looks apt for the proceedings. Anup Bhandari, who impressed with RangiTaranga came with a larger than life movie that will surely entertain the audience to some extent.

Finally, Vikrant Rona is another commercial entertainer from Kannada film industry that is capable of entertaining all section of audience and should be watched in theatres.