Vikram Telugu Movie Review: Kamal Hasan, there is no need introduction for him as we all know he created history in Indian cinemas with his films and characters, the fact is he made many films Tamil but in those films, he had lot flops but coming to Telugu, he made few straight Telugu films and most of them was a huge hit and those films became a cult classics, undoubtedly Telugu audience owned him as a Telugu man and now he came upon with much-awaited film Vikram, the expectations has peaks from the announcement and added to that biggest stars like Vijay Sethupathhi and Fahadh Fasil are featured in this film, However, its visual feast to watch the trio on screen. 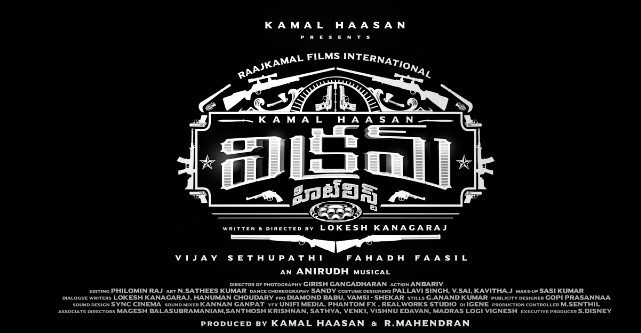 However, with humongous expectations the film has finally released today June 03, 2022, and getting unimaginable talk, as all the movie lovers especially Kamal Hasan fans have been going mad in the theaters, so with any delay, let’s get delve into the in-depth review of the film and let’s know whether Vikram is worth watching or not.

Vikram is an action thriller where, Arun Kumar Vikram(Kamal Hasan) is a retired RAW agent, he is known for his brutality as he can to an extent punish the criminal, as there are multiple kidnappings happening in the city in the name of Mask Man meanwhile Amar(Fahadh Fasil) is a police officer who starts an investigation to catch the mask men and in the process, he gets to know about a gangster called Santhanam(Vijay Sethupathi), Eventually, Vikram knows Santhanam has a connection of Kidnaps and also Vikram has a secret mission too, finally, what was the secret mission and who is the masked man? and to know all these you need to watch the film.

Vikram starring, Kamal Haasan, Vijay Sethupathi, and Fahadh Faasil, and is written and directed by  Lokesh Kanagaraj, Cinematography has done by Girish Gangadharan, Music has composed by Anirudh Ravichandran and the film was produced by Kamal Haasan & R.Mahendran under the banner of Raaj Kamal films International.

Undoubtedly Vikram’s USP(Unique Selling Point) is Kamal Hasan, and Vijay Sethupathi and Fahadh Faasil are bonuses for the film, the audience is coming to the theaters to watch them on screen because Vikram is the biggest multi starer movie ever made, and to handle three legends it’s not at all easy, However, to talk about the film, Vikram has brilliant premise as Lokesh always choose a dark theme and it worked well in Vikram to take the audience into Vikram’s world.

The movie starts off well and it never gets bored till the interval as Lokesh Kanagaraj has written brilliant scenes, right from the beginning to end he will engage you with his taking but in Vikram, it reflects Hollywood movie’s inspiration in terms of taking and shot composition, as usual, the interval worked out well as it holds the curiosity to watch the second half, Second half starts half a bit slow as the story shifts to Vikram’s flashback and it is an emotional thread but somehow that emotion didn’t land properly and that was the biggest drawback of the film, later on, movie starts getting interested with Fahadh’s and Vijay Sethupathi’s scenes and climax is the biggest highlight of the film.

Kamal Hasan as Vikram is just nailed it as he again proved that, unlike any other hero, at the age of 67 it’s not easy to play this kind of character but he effortlessly pulled it off, there are some scenes he literally emoted with his eyes as we can see a vintage Kamal Hasan, Vijay Sethupathi as Santhanam is just brilliant as we all know how brilliant actor he is, he will justify any character with his performance and finally Fahadhn as Amar is killed there are a lot of he has to show various emotions in a single scene and he wins you heart with his performance and lot emotions he emotes with his eyes and rest of the cast did well.

Lokesh Kangaraj grabbed the attention with Kathi starring Karthi, his style of storytelling and taking completely different and that’s what Kamal Hasan liked about him, first and foremost he succeded in managing the acting legends like Kamal Hasan, Vijay Sethupathi and Fahadh Faasil, and he knows the audience pulse that where the scenes should be elevated and that worked out well in the film, Vikram is beautifully written script as for trio scenes should be interesting and it should add to the movie progress and audiences didn’t feel like artificial scenes it perfectly blend with the story. Despite the fact, that Vikram is a well-written script and Lokesh Kangaraj has succeeded in engaging the audience.

Technically Vikram looks brilliant as Girish Gangadharan’s cinematography is the biggest advantage of the film, he understood the director’s vision in bringing the dark visuals as the color pallet and lighting everything took the film to next level, and again the biggest backbone of the film is Anirudh Ravichandran his songs and background score has changed the flavor of the movie and rest of technical did their part well.

Finally, Vikram is a three-man show, and Vikram is a must-watch film for Kamal Hasan, Vijay Sethupathi, and Fahadh Faasil fans.