Vijayanand Telugu Movie Review: Vijayanand is a Kannada Biopic film of Dr. Vijay Sankeshwar, well the film has released across languages on December 09, 2022, as we all know Kannada films are making noise with the content and Vijayanand trailer seems to have a strong story, well without any delay let’s get into the in-depth review and find out whether the film is worth watching or not. 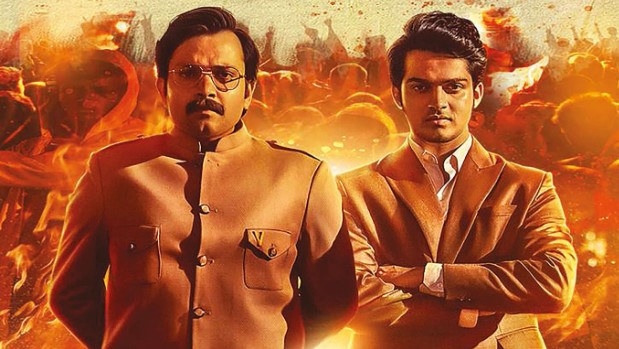 Vijayanand is a biopic of Padma Shri awardee Dr. Vijay Sankeshwar, the story narrates a 19-year-old boy Vijay Sankeshwar(Nihal) left home and lands at Gadag, a small city in the heart of North Karnataka to achieve something, in the process he decided to start a transport business and facing with many obstacles he started his business with one vehicle, Finally, how he became an owner of 4300 vehicles and what was the obstacles he faces to reach this point is what you will see in the Vijayanand movie.

We have seen many biopics over the years that a man with many dreams left home and lands in the city to achieve something in the process of that he faces many obstacles but finally, he creates an empire and becomes an inspiration, although the biopics are interesting to watch because the situations in every biopic are different, well the story has a non-linear screenplay, the starts off interestingly by explaining the success of Vijay Sankeshwar, it then dives into the back story of Vijay Sankeshawar’s childhood, the first half went with showing his childhood that what situations made him decide to achieve something and his beginning struggles in the process of starting a transport company and with few actin blocks, However, despite the regular scenes the setup and mood pulls you into the film and make you part of it.

The second half where the actual story begins when Vijay Sankeshwar become a competition for others,  The director shows the greed and politics of other businessmen to bring him down quite well, but the film lacks interest here and there with a lack of emotion, if the right amount of emotion placed well in the second half then the film would have been much better, the film has many flaws as many scenes were not places well as it doesn’t seem like they are telling a story rather that they pics random scenes and places and that was the biggest minus point for the film, Despite the fact the film has some elements that will hook few sections of audience.

Nihal as Vijay Sankeshwar is good but he failed in bringing authenticity to the character, Ananth Nag is good as the father of Vijay Sankeshwar and Archana Cottage is good in parts, and the rest of the cast Bharath Bopanna, Siri Prahalad, Vinaya Prasad, Prakash Belwadi, V Ravichandran, Anish Kuruvilla, Ramesh Bhat, Dayal Padmanabhan, Shine Shetty did their part well as per the story requires.

Kudos to the director Rishika Sharma for bringing this untold story to the audience and make them inspired, However,  Padma Shri awardee Dr. Vijay Sankeshwar’s story is good and inspirational too but when showing the real story on screen, the director needs to take cinematic liberties to dramatize the scene for the audience to feel, but the problem is Rishika Sharam cinematic liberty went a bit overboard in the film, there are many scenes in the film that intentionally commercialized just to entertain the audience, However, she partly succeeded in engaging the audience.

Technically, Vijayanand is good except few VFX, right from Keertan Poojary’s visuals, lighting, and framing pulls into the world of Vijayanand and makes you travel with the story and Gopi Sundar’s songs didn’t register, the songs might work in the Kannada but in Telugu, it wasn’t suite the lyrics but he impressed with his background score and rest of the technical team did well.

Overall, Vijayanand is a commercialized biopic.