Vijay Antony Telugu Dubbed Movies List 2021: Vijay Antony is a South Indian actor, music composer, singer, Sound Engineer, film editor, lyricist and film producer working mainly in Tamil and Telugu movies. Vijay Antony made his debut as a music director in 2005. He is the first Indian to win the 2009 Cannes Golden Lion for the commercial “Naaka Mukka” in the “Best Music” category. He is the most successful Tamil actors in Telugu besides Suriya, Karthi, Vikram and others. 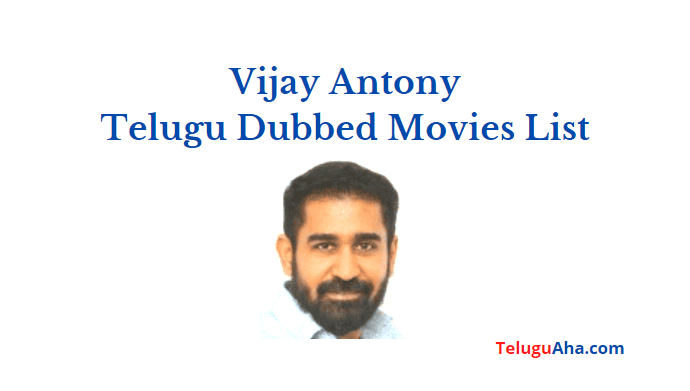 His interest in acting driven him to play a lead role in Naan which is dubbed in Telugu as Nakili, this film has become a successful venture. However, he got immense popularity as an actor with Pichaikaran (2016), dubbed into Telugu as Bichagadu brought him a commercial break across South Indian states. This film has made more than Rs.50 Crore at Box Office. The songs are still popular in Tamil and Telugu states.

He was born on Thursday, July 24, 1975 at Nagercoil, Tamil Nadu in Christian family. Vijay is a graduate of the Loyola School of Arts and Science. He went through difficult times before entering into Films. He is the great-grandson of Samuel Vedanayagam Pillai (1826-1889), also known as Mayavaram Vedanayagam Pillai, an Indian official who is remembered as the author of the author of Prathapa Mudaliar Charithram, recognized as the first modern Tamil novel.