Victim: Who is Next? Telugu Dubbed Web Series Review: The Tamil cinema industry is experimenting with anthology series, in which multiple directors each take charge of a few episodes. Anthology series like “Navarasa” and “Kasada Thapara” proved the concept successful, although it was ultimately not pursued by many other endeavors. In the Tamil cinema business, there are a number of outstanding directors, and they have all contributed to an anthology series called Victim. As the series is now available on Sony Liv, let’s see if it’s worth our time by reading some reviews to find out if it’s any good. 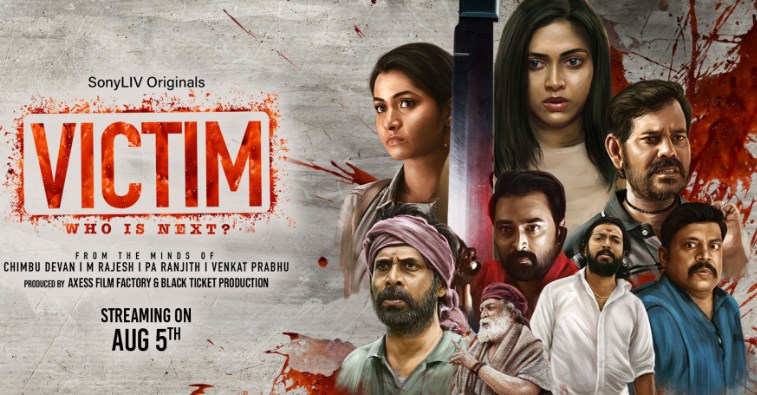 Among the series regulars are Nasser, Thambi Ramaiah, Natraj (Natty), Priya Bavani shankar, Kalaiarasan, Guru Somasundaram, Prasanna, Amala Paul, and Krish. Chimbudevan, Rajesh.M, Pa.Ranjith, and Venkat Prabhu are the film’s directors. All episodes of the series are produced by Axess Film Factory and Black Ticket Company. The cinematography was done by R.Saravanan, Sakthi Saravanan, and Thamizh A Azhagan, and the score was composed by Sam C S, Premgi, Ganesh Sekar, and Tenma. They are edited by Lawrence Kishore, Akash Thomas, Selva RK, and Venkat Raajen.

Different filmmakers bring their own style and flair to each episode of the thriller anthology series Victim, keeping viewers engaged throughout the entire run. The best of Chimbudevan’s four exhilarating tales is the fantasy thriller Kottai Pakku Vathalum Mottai Maadi Sitharum, which features not only fantastical elements but also outstanding acting. There are touching moments in other episodes of the series that will compel viewers to stay until the conclusion. The sole downer is the M Rajesh-directed episode, which has a weak story and weak narration.

The series also has touching moments that will leave you feeling all warm and fuzzy inside. Incorporating just the right amount of drama without straying too far from traditional native tales, the directors have done a fantastic job.

All of the actors in the show had outstanding performances in their respective episodes. Throughout the episodes, Nasser’s background and expertise shine through. Thambi Ramaiah, noted for his comedic timing, entertains us at times and draws us in with his sincere portrayal. After a lengthy absence from the screen, Amala Paul, Prasanna, Priya Bavani Shankar, and Kalaiarasan all provide great performances. Every other cast member in the show also performed a great job.

This series has a decent visual style. Compromises and budget constraints can be seen in a few sequences throughout multiple episodes. The soundtrack, which was composed by a number of different musicians, fits the episodes well. The cinematographers did a good job, using straightforward compositions to highlight the birth of Jesus. The directors all put in solid work, resulting in a solid anthology of thrillers.

Last but not least, Victim is a fascinating and stressful collection of thrillers that may be found on several digital platforms today.