Varalaxmi Sarathkumar’s Om Sri Kanaka Durga Movie OTT Release Date: Varalaxmi Sarathkumar’s titular role ‘Om Sri Kanaka Durga’ and Megha Akash and Sumanth Sailendra playing the lead roles in the film officially launched recently with a formal pooja ceremony and lot celebrities have graced the event, However, debutant Lanka Sasidhar helmed the project as well as produced the film, However, Veteran actor Murali Mohan graced the event and extended his wishes and stay tuned with us for a while to know some interesting information. 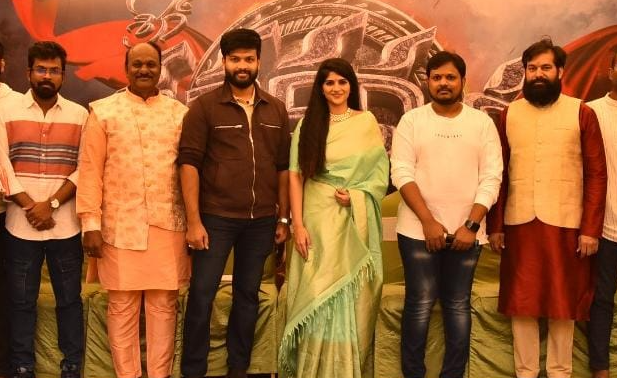 Om Sri Kanaka Durga is touted to be a love and action film though the film title represents the Goddess and yes there is a layer of GOD but the makers haven’t divulged much about the project, However, we go by the motion poster video that the film is about a war between Good and Evil when Sin crosses its limit.

Varalaxmi Sarathkumar plays the titular role and Megha Akash and Sumanth Sailendra are the main leads the film was written by Naresh Amaraneni while the film is directed by Lanka Sasidhar and the cinematography will be handled by Srichith Vijayan Damodar, Music is composed by Sam K. Prasan and the film Produced by Lanka Sasidhar under the banner of Nextgen Production and present by Lanka Phanidhar.

Om Sri Kanaka Durga is going to be made with a huge budget as the makers have said that the film has a lot of scope for VFX we have hired the best VFX team and the visuals are going to be spectacular on Big Screen.

Varalaxmi Sarathkuamar has been doing quite well across the language as she was last seen in Telugu was Pakka Commercial she had done a guest role and currently, she is been doing a film with Balakrishna, directed by Gopichand Malineni and Prasanth Varma’s ‘Hanu Man‘ apart from all these a films called ‘Sabari’ which are being made in all south Indian languages, However, this film craze is going to be twofold, Despite the fact that makers haven’t divulged the digital rights details as we can expect all the details after the theatrical release, till then stay tuned with us.

Megha Akash has been doing quite well across the languages as she is been doing a film called ‘Prama Desam’ starring Trigun and a few Tamil films also and Sumanth Sailendra who was introduced with a film called ‘Brand Babu’ and now this film is a crucial film for him, however, the films regular will be commenced in September and as of now, makers haven’t announced the OTT release date as we can expect the OTT release date after the theatrical release, till then stay tuned with us.

Om Sri Kanaka Durga makers haven’t dropped the trailer but they have released the motion poster of the film and you can have look below.

Not Declared, Om Sri Kanaka Durga movie makers have not yet announced.

Not Declared, Om Sri Kanaka Durga movie makers have not divulged yet.

Not Declared, the Om Sri Kanaka Durga movie has not been released so we can not say Hit or Flop

Om Sri Kanaka Durga is going to visual feast as the film will hit the screen in 2023.