Uppena Movie TRP Rating 2nd Time in Star Maa TV: Panja Vaisshnav Tej’s debut film ‘Uppena’ is a remarkable film in his career. The movie has given him a blockbuster success and also stardom. Directed by Buchi Babu Sana, this emotional love story has touched the hearts of many and it recorded huge numbers at the box-office. It got a very good reception when it was released on Netflix and the situation is not different during the time of its premiere on television too. 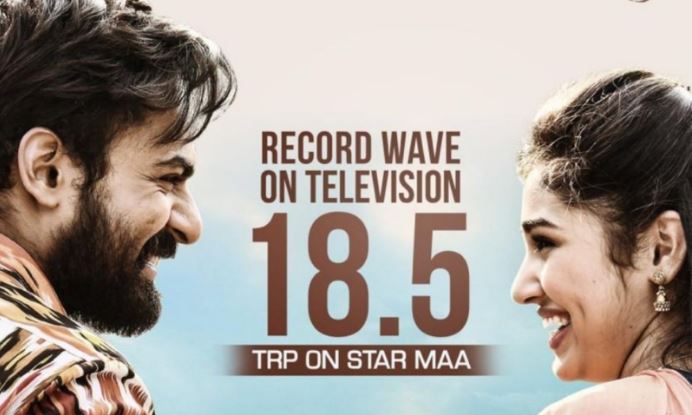 The film marks the debut film of Panja Vaisshnav Tej, Krithi Shetty and Buchi Babu Sana. The film also stars Tamil actor Vijay Sethupathi in the most important role in negative shade. Uppena(2021) is bankrolled jointly by Mythri Movie Makers and Sukumar. The film has Devi Sri Prasad as its music composer, Shamdat as the cinematographer and Naveen Nooli as the editor.

Uppena is the latest Telugu movie directed by Bucchi Babu Sana, and jointly produced by Sukumar Writings and Mythri Movie Makers. The film features debutants Panjaa Vaisshnav Tej and Krithi Shetty in the lead roles, with Vijay Sethupathi playing a prominent role.The music is composed by Devi Sri Prasad, with cinematography handled by Shamdat, and editing by Navin Nooli.

On its first telecast, ‘Uppena’ got a TRP rating of 18.51 which is exceptional for a debut hero’s film. But the film got 11.37 TRP when it was broadcasted for the second time and it surprised many. This shows that the family audience loved the film and have watched it again. This is a huge feat for ‘Uppena’ team. As we know, Krithi Shetty is the heroine and Vijay Sethupathi played the villain’s role. Devi Sri Prasadâ€™s music is one of the biggest assets for this movie which was produced by Mythri Movie Makers and Sukumar.

Recently, the film was telecast on star Maa and registered 11.37 ratings. Earlier, when Uppena was first telecast on Star Maa, it registered 18.5 which was the highest for any debut hero. Vaishnav Tej did it with Uppena.

Uppena is a complete love story with a lot of engaging drama and emotions throughout the film. Vijay Sethupathi is playing a strong character in negative shade. Although this is a regular love story, the makers are trying something new. It is a love story between two people from rich and poor families and Whether their love succeeds or not is the rest of the story.

Leading Telugu Television channel “Star Maa TV” purchased the Satellite rights of ‘Uppena’ for an unbelievable price. Uppena satellite rights are with Star Maa TV, the movie is all set to premiere on Star Maa for the 3rd Time very soon.