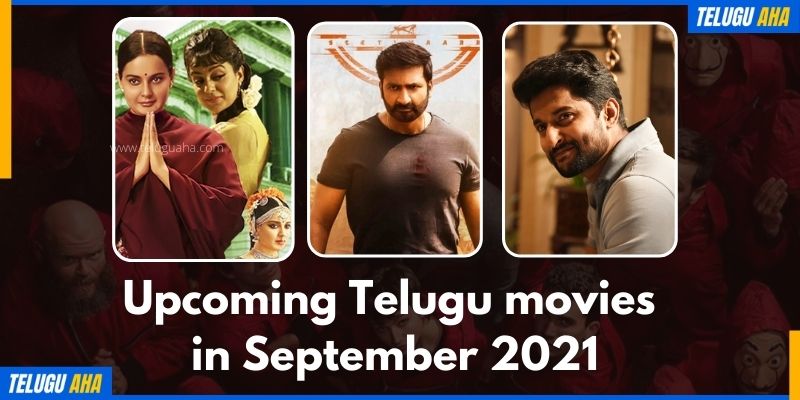 Story: Avasarala Srinivas Plays the lead role as Bal head man who fells in love with a girl. He tries to cover his bald head with wig. Its a complete comedy entertainer film.

Story: Seetimaar is completely a Sports Action Drama movie. Gopichand Plays the role of Women Kabaddi Players Coach. He handles and Trains a Women Kabaddi team. But goons starts attacking him which is the crux part of the movie.

Story: Money Heist all series stories revolves around the Lootings planned and implemented by a gang under supervision of one Professor. The Aim of these gang is that they’ll not kill any of the hostages under them.

Story: Thalaivi is Biopic Movie of Former Chief Minister Jayalalitha. Kangana Ranaut is playing the role of Jayalalitha. Jayalalithas whole Carreer of film and Politics will be shown in this movie.

Story: Jagapathi babu and Nani are brothers in this movie. Jagapathi babu plays the role of MRO officers. In one of the land dealing Jagapathi babu will be beaten by rowdies. How Nani faces and fights against these goons is the crux part of the movie.

Music: Yet to be revealed

Story: Rahul Ramakrishna Plays the role of Laxman who is a married man. He registered with one online surveillance agency. He starts seeing Priya in his mobile through hidden cameras. But later laxman starts facing Complex problems.

Music: Yet to Update

Story: Annabelle Sethupathi is completely a Horror Comedy Picture. Vijaysethupathi and Tapsee pannu playing dual roles in this movie. Story details aren’t revealed by writer or director. Tapsee pannu tweeted about this movie as “ One life is not enough to see it all” . by this means we can estimate it to be like a reborn story.

This September its going to be really a big treat for Telugu Audience from these above movie. Some Big Movies like Nagachaitanya’s Love Story and Nithin’s Maestro got Postponed. Still some other movies may announce its release dates which could release at the end of September.