Udhayanidhi Stalin Telugu Dubbed Movies List: Udhayanidhi Stalin was born on November 27, 1977 in Chennai in the state of Tamil Nadu, India. He is an Indian Film Producer, Film Actor and Distributor who mainly known for his work in Tamil Cinema. His popular Telugu dubbed movies are Ok Ok (2012) and Seenugadi Love Story (2014), Psycho (2020) among others. Besides acting he is also into Politics. He is the Grandson of M Karunanidhi and son of MK Stalin. 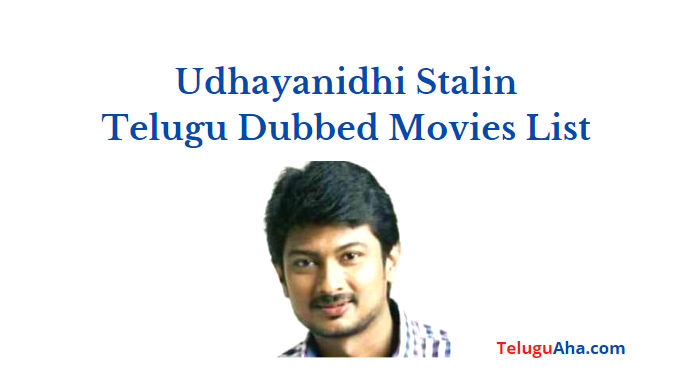 He entered into Tamil film industry as a film producer with Red Giant Movies, a film production House. During his production career, he made films, such as; “Kuruvi” (2008), “Aadhava” (2009), and “Manmadan Ambu”, (2010). Later his interest in acting made him as a Hero with “Oru Kal Oru Kannadi” which is a Super Hit. After that he never looked back and he is now one of the popular Tamil Heroes. usually Tamil movies are mostly dubbed into Telugu. Similarly, some of his well made movies dubs into Telugu language as well. Here you will find the complete list of Udhayanidhi Stalin Telugu Dubbed Movies till date.

Udhayanidhi is the elder son of M.K.Stalin, who is a former Deputy Chief Minister of Tamil Nadu. Udhayanidhi did his schooling from Don Bosco and later graduated from Loyola College in Visual Communications. After completing his VisCom, he decided to join the film industry as his several relatives are associated with the film industry in the 1960s. His cousin Arulnithi is also an actor in Kollywood.