Trivikram Wiki and Biography: Trivikram Srinivas is an Indian director and screenwriter who is also known as Akella Naga Srinivasa Sarma. He works mostly on Telugu movies. Trivikram is known for his writing, his exciting stories, and his stories about family and marriage. He has won two State Nandi Awards, one SIIMA Award, and two South Filmfare Awards. 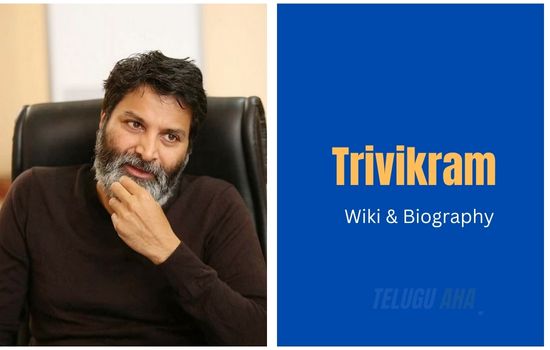 In 2015, he was also given the BN Reddy National Award for his work in Indian cinema. The movies Maatala Maantrikudu and Guruji made Trivikram famous.

Trivikram Srinivas was born in Bhimavaram, Andhra Pradesh, on November 7, 1971. His parents are Akella Narsamma and Akella Uday Bhaskar Rao. Andhra University gave him his master’s degree in nuclear physics. He went to work in Hyderabad. He kept living with Sunil even though he was writing stories for Daily Serials.

Sunil told Gautam Raju about Trivikram, who worked for the actor to help pay for Sunil’s kids’ college tuition. Soujanaya is a lyricist and the niece of Sirivennela Seetha Rama Sastry. Trivikram married her. The couple was thankful that they had two kids.

Trivikram Srinivas was born in the town of Bhimavaram, West Godavari, to a family of Telugu Brahmins. After going to S.Ch.B.R.M. High School, he went to D.N.R. College in Bhimavaram for his first year of college. He got his master’s degree in nuclear physics with high marks from Andhra University.

Both Trivikram and Sunil got their degrees from the same Bhimavaram university. When they were just starting out in movies, they shared a room. They are now good friends. Trivikram also worked in schools as a teacher of math and science.

Trivikram liked Telugu literature, but he didn’t want to work in the entertainment business. They were close friends with Trivikram, Sunil, R. P. Patnaik, Chandra Siddartha (known for his work on Appudappudu, Analuguru, and Madhumasam), Dasaradh (Santosham, Swagatham), Gopi Mohan (a well-known screenwriter), Venu, and Dasaradh.
He just went to Hyderabad for that reason. He stayed in Trivikram and Sunil’s bedroom for several days. Gopi Mohan also stayed with them for a few days before he and Veeru Potla moved into a separate room.

He might be the only writer in Telugu movies with as many skills as him after Late Jandhyala. He thought that the dialogue in Telugu movies had changed a lot. When he was trying to get into the field, he did face many problems, but when he finally made it, everyone in the field took notice. He won the Nandi Award for best dialogue writer four times in five years. This is a really impressive feat.

The dialogues he wrote for Telugu movies like Nuvve Kavali, Chirunavvutho, Nuvvu Naaku Nachav, and Manmadhudu are some of Trivikram’s best-known works. Most of the time, his conversations are funny one-liners, but sometimes he says something important about life or love. He worked on the script for Chirunavvutho for nine months, and Trivikram won the Nandi Award for it.

Even though he is best known for his work with dialogue, he is the most in-demand director right now. He also wrote the lyrics for the movie Oka Raju Oka Rani. In the movie Nuvve Nuvve, he sang the song “Computersu Artsu Scienceu.” After his first movie, Nuvve Nuvve, which was praised by critics, he became well-known for Athadu.