You must have all watched South Indian movies, particularly Telugu movies, at some point or another. And it is clear that we all enjoy South Indian films a lot. South Indian movies plots and actions are so astounding that they leave a lasting impression on us. After the success of “Bahubali: The Beginning,” Telugu films gained a new level of popularity in India. People all throughout the nation began to adore Telugu actors. When it comes to actresses, numerous well-known leading ladies from various languages have made their Telugu film debuts. Today, let’s have a look at the 30 most well-known Telugu women who, for a while, dominated Telugu cinema with their performances and glitz. Some of Telugu culture’s most well-known character actors are also included in this list of actresses. 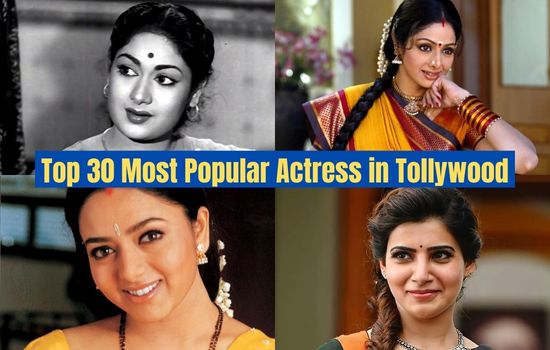 Top 30 Most Popular Actress in Tollywood:

Savitri Ganesan was a popular figure in the Indian film industries of Telugu and Tamil, where she performed as an actress, playback singer, dancer, director, and producer. Her filmography included roles in Kannada, Hindi, and Malayalam. For almost three decades, she was featured in over 250 movies.

Anjali Devi was a Telugu and Tamil film actress, model, and producer from India. She played the title character in several films, including Chenchu Lakshmi, Suvarna Sundari, and Anarkali, and became famous for her portrayal of the Devi Sita in Lava Kusa.

Indian actress, singer, film producer, director, musician, and author P. Bhanumathi Ramakrishna. According to many, she was the first female super star in Telugu films. In addition, her film Chandirani, which was her directorial debut, is widely regarded as having made her the first woman to have that distinction in Telugu cinema.

Jamuna is a well-known Indian actress, director, and politician who has worked primarily in Telugu cinema. In Dr. Garikapati Rajarao’s Puttillu, she made her acting debut at the tender age of 16; her big break came with L. V. Prasad’s Missamma. She has also acted in films in Tamil, Kannada, and Hindi.

The Indian actress Suryakantham starred in the Tamil film industry, or Tollywood. For the most part, she was recognised for playing vengeful in-laws. On October 28th, 1924, Suryakantham was born in Kakinada, Andhra Pradesh, British India (present-day India). Chakrapani (1954), Gundamma Katha (1962), and Chiranjeevulu (1967) were some of the films in which she appeared. Her first husband was Peddibhotla, Chalapathi Rao. It was in Hyderabad, Andhra Pradesh, India, on December 17th, 1996 that she passed away.

Indian film audiences have seen Rama Prabha in her roles in Telugu, Tamil, and Hindi. With a career spanning over 60 years and more than 1,400 films, she is regarded as a character artist who has worked alongside superstars from every era of South Indian Cinema.

The Indian actress and politician Sarada. Sarada, who has won three National Awards for her performance in Malayalam and Telugu films, is a well-known actress. She has made cameo appearances in a handful of films in Tamil, Hindi, and Kannada.

Mahalakshmi, or Lakshmi as she is called in the film industry, is a popular Indian actress who has appeared in both Tamil and Hindi films. The 1961 Tamil film Sri Valli was her first appearance in front of the camera. She made her acting debut in the 1968 Tamil film Jeevanaamsam.

As an Indian actress, Vanisri is best-known for her roles in Telugu, Tamil, and Kannada films. She has won three Filmfare Awards South, two Nandi Awards, and the Tamil Nadu State Film Award over the course of her 40-year film career.

Indian actress and politician Jaya Prada Nahata. She had a huge impact on the Telugu and Hindi film industries during the late 1970s, 1980s, and early 1990s, and is now widely considered a legend in both countries.

An Indian actress and producer, Shree Amma Yanger Ayyappan, better known by her stage name Sridevi, acted in and produced films in the languages of Telugu, Tamil, Hindi, Malayalam, and Kannada. Sridevi was born in Sivakasi, Tamil Nadu, India on August 13, 1963. This was her father’s hometown. Her Andhra Pradesh (and specifically Tirupati)-born mother. As a result, Sridevi is fluent in both Telugu and Tamil, the languages she was raised on.

Indian actress and politician Jayasudha Kapoor is best known for her roles in the Telugu film industry. In addition to her work in a handful of Hindi films, she has also appeared in Kannada, Malayalam, and Tamil productions. Her birth name was Subadra, but her family quickly decided that Sujatha was more in keeping with modern times.

Vijayashanti is a multi-talented Indian performer, producer, and politician. Over the course of her 40-year career, she has appeared in 187 full-length films, mostly in Telugu and Tamil but also in Hindi, Kannada, and Malayalam.

Radha, the stage name of Indian actress Udaya Chandrika, who has also performed in films in Malayalam, Kannada, and Hindi, is her most well-known role. For over a decade, beginning in 1981 and ending in 1991, she was one of Tollywood’s most popular leading ladies.

Known primarily for her work in Tamil and Telugu cinema, Raadhika Sarathkumar has also appeared in films in Malayalam, Hindi, and Kannada. She started the production company that brought you Chithi, Selvi, and Arasi, all of which she also starred in. Sadly, Raadhika’s father, the late Tamil actor and comedian Mohan R. Radha, has passed away, leaving her as his sole heir. They have a Sri Lankan mother. Nirosha (Niroja), her younger sister, is also an actor, while R. Radharavi, her older stepbrother, is a director.

Indian actress, singer, and dancer (in the Kuchipudi style) Bhanupriya. Over the course of her four-decade career, Bhanupriya has made 155 film appearances, mostly in Telugu and Tamil but also occasionally in Malayalam, Kannada, and Hindi.

Indian actress, director, producer, and writer Suhasini Maniratnam is more commonly known by her stage name, Suhasini. She works primarily in the Tamil film industry. She has acted in films in four different South Asian languages: Tamil, Telugu, Malayalam, and Kannada. In 1980, she made her film debut in Tamil flick. In the words of Nenjathai Killathe.

Madhavi, or Kanaka Vijayalakshmi, is an Indian actress who has appeared in films in a variety of languages, including Malayalam, Telugu, Hindi, Tamil, and Kannada. During her nearly two decade long career, she appeared in several hundred movies and was considered a top actress in South Indian films.

Among the many Indian film genres she has been in, Rajani is most well-known for Telugu, Tamil, Kannada, and Malayalam. She has appeared in almost 150 full-length films, such as Rendu Rellu Aaru, Seetharama Kalyanam, Aha Naa Pellanta, and Majnu.

The Indian politician and actress Nagma Arvind Morarji. In the 1990s, she was a top choice for main roles. In 1990, she made her first appearance on the big screen alongside Salman Khan in the film Baaghi. The film ranked as the year’s ninth best earner in Hindi cinema.

Soundarya (born K. S. Sowmya) is a popular Indian actress who primarily appeared in Telugu cinema but also did work in Kannada, Tamil, and Malayalam. For her work as a producer on the 2002 Kannada film Dweepa, she was awarded the National Film Award for Best Feature Film.

Indian actress Aamani is best known for her work in the Telugu film industry, though she has also appeared in some Tamil and Kannada productions. The Telugu film Jamba Lakidi Pamba, directed by E. V. V. Satyanarayana, marked her first starring role, opposite Naresh. Indeed, audiences flocked to see this movie in droves.

Roja Selvamani, or R. K. Roja as she is more commonly known, is a politician and actress from India. She is currently Andhra Pradesh’s Minister for Tourism, Culture, and the Development of Young People. From 1991 until 2002, she starred as a major character in films made in both Telugu and Tamil.

Indian actress Rambha. Rambha’s career spanned nearly two decades, and she appeared in over a hundred films. These films were made in a total of eight different regional languages, most of which were in Telugu and Tamil, but also in Malayalam, Kannada, Hindi, and even a few in Bengali, Bhojpuri, and English.

Raasi is a famous Indian actress who has mostly worked in Tamil and Telugu films. In Malayalam and Tamil cinema, she is known as Manthra. Subhakankshalu, Gokulamlo Seeta, and Pelli Pandiri were just a few of the movies in which she had a role.

An Indian film director, producer, and actress, Vijaya Nirmala was best known for her work in the Telugu film industry, though she also directed and produced in Malayalam and Tamil. She had a career spanning over 60 years in which she appeared in over 200 films and directed over 40.

Anushka Shetty, formerly known by her birth name Sweety Shetty, is an Indian actress and model who is most active in Telugu and Tamil cinema. She has won multiple state film awards in both Andhra Pradesh and Tamil Nadu, in addition to three Filmfare Awards South.

Indian cinema industries in which Samantha Ruth Prabhu is most active are Telugu and Tamil. She has won a slew of honours for her work in film, including four South Filmfare Awards, six South Indian International Movie Awards, and two Andhra Pradesh State Nandi Awards.

Sai Pallavi, whose real name is Sai Pallavi Senthamarai Kannan, is an Indian actress who has appeared in films in Telugu, Tamil, and Malayalam. Among her many accolades are four Filmfare Awards South and a spot on Forbes’s list of India’s 30 under 30 for 2020.