Top 10 Most Handsome Actor in Tollywood: Right from the beginning to current generations Tollywood have many handsome heroes, unlike any other industry, it’s their job to look good on screen and it’s not at all easy to maintain the charm and physique, even audience doesn’t like to see their favorite heroes in de glamour roles, However, in this article, we are going to discuss the Top 10 most handsome actors in Tollywood of All Time. 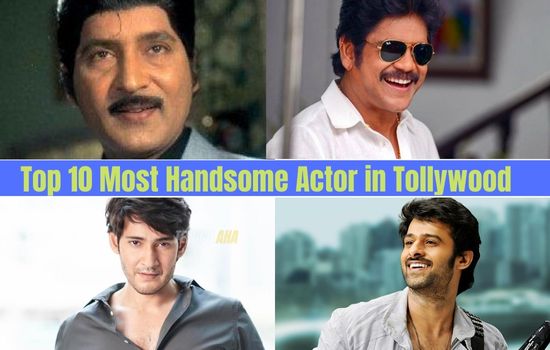 Top 10 Most Handsome Actor in Tollywood of All Time

Indian actor Sobhan Babu was well-known for his Telugu film roles. Daiva Balam was released before Bhakta Sabari, where he made his film debut. At the 4th International Film Festival of India, he received Special Mention for Bangaru Panjaram in addition to four Filmfare Awards South for Best Actor.

In addition to acting, Superstar Krishna had an impact on Telugu cinema as a producer and director. There are many ways to look at his immense impact on cinema. He appeared in a few films in supporting roles before making his lead acting debut in “Tene Manasulu” by Adurthi Subbarao.

The endearing celebrity was born on August 9th, 1975. The charming, talented young man who has had a lot of potentials since childhood made his acting debut in Needa as a child actor. The Prince of Tollywood is how most people refer to him. Mahesh Babu, one of the most fashionable and appealing actors, has been in many movies and is recognized as one of India’s greatest actors. He is one of the most attractive and endearing superstars in India. He finished fifth in the Times of India’s annual analysis of the Most Attractive Guy in 2011, second in 2012, and first in 2013. He has appeared in more than 30 films and received more than 25 accolades.

Indian actor Ram Pothineni primarily appears in Telugu movies. With the commercial triumph Devadasu, he made his acting debut, for which he was recognized with the Filmfare Award for Best Male Debut – South. He has received two Filmfare Awards South and one SIIMA Award.

He is well-known both as a producer and a dashing Telugu actor. In Ypsilanti, Michigan, at Eastern Michigan University, he completed a B.S. in Automobile Engineering program. He later ventured into the film business as well, appearing in a number of blockbuster films over the course of about 30 years. Akkineni Nagarjuna Rao, better known by his stage name Nagarjuna, is an Indian actor, producer, television host, and businessman. Along with a few Hindi and Tamil films, Telugu films have been the majority of Nagarjuna’s acting roles.

Prabhas, a young Rebel star, is savoring the enormous fan following. As per the most recent information, the pan-Indian superstar Prabhas once more topped the list of the “Top Ten Most Handsome Asian Men 2021.” The sexy actor Prabhas has established himself as the most attractive man by taking the top rank.

In addition to Hindi and Tamil movies, Ramanaidu “Rana” Daggubati is an Indian actor and producer best known for his work in Telugu movies.

Unquestionably, one of Tollywood’s hottest actors right now is actor Ram Charan. The actor is on a roll and is being hailed as a future superstar thanks to hits like Racha and Naayak. The fact that he was ranked No. 4 on the list of T-Most Town’s Desirable Men suggests that he has a growing female fan base.

Actor Allu Arjun from Tollywood is well-liked by his fans for his excellent on-screen performance, distinctive swag, and chic demeanor. He is referred to as an icon because of how different he is from other actors in terms of style. Allu Arjun, formerly known as the Stylish Star, is now known as the Icon Star.