Top 10 Most Beautiful Actress in Tollywood: Being glamour is not just to show their skin, back then there were many heroines who come from orthodox backgrounds like Savitri, Jamuna, etc but they made a strong impact as beautiful actresses in the audience’s minds, though now the definition of being beautiful has changed, although there are few heroines who look beautiful in this current generations too, However, in this article, we are going to discuss the Top 10 Most Beautiful Actress in Tollywood, instead of a current actress, we have listed of all time you can check below. 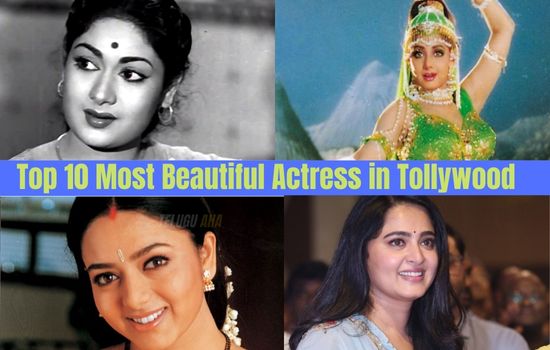 Top 10 Most Beautiful Actress in Tollywood

Indian actress, playback singer, dancer, director, and producer Savitri Ganesan is best known for her work in the Telugu and Tamil film industries. She had also contributed to movies in Malayalam, Hindi, and Kannada. Over a three-decade period, she appeared in more than 250 movies.

Jamuna is an Indian actress, politician, and director who primarily worked in Telugu movies. She made her acting debut in Dr. Garikapati Rajarao’s Puttillu when she was 16 years old, and L. V. Prasad’s Missamma was the film that gave her her big break. Additional films in her filmography are in Tamil, Kannada, and Hindi.

Indian actress Vasundhara Devi, better known by her stage name Kanchana, has appeared in films in Telugu, Tamil, and Kannada in addition to Malayalam and Hindi.

Sridevi, also known by her stage name Shree Amma Yanger Ayyappan, was an Indian actress and producer who appeared in movies in the Telugu, Tamil, Hindi, Malayalam, and Kannada languages.

Rajani is an Indian actress who has appeared in movies in the languages of Telugu, Tamil, Kannada, and Malayalam. She has contributed to 150 full-length movies, including Majnu, Aha Naa Pellanta, Seetharama Kalyanam, and Rendu Rellu Aaru.

Indian actress K. S. Sowmya, better known by her stage name Soundarya, primarily appeared in Telugu movies but also appeared in Kannada, Tamil, and Malayalam ones. She was a producer on the Kannada movie Dweepa, which won the National Film Award for Best Feature Film in 2002.

Indian actress Sakshi Shivanand has acted in Telugu, Tamil, Kannada, Malayalam, and Hindi movies. Her most well-known work is Aapko Pehle Bhi Kahin Dekha Hai, a film by Anubhav Sinha with Priyanshu Chatterjee, Om Puri, and Farida Jalal as well as her.

Anushka Shetty, also known as Sweety Shetty, is an Indian actress and model who primarily appears in Telugu and Tamil movies. She has won three Filmfare Awards South, a state Nandi Award for Andhra Pradesh, and a Tamil Nadu State Film Award.

In addition to a few Hindi films, Kajal Aggarwal is an Indian actress and model who primarily works in Telugu and Tamil movies. In addition to appearing in more than 50 movies, Aggarwal has won two South Indian International Movie Awards. With the 2004 Hindi film Kyun!, Aggarwal made her acting debut.