Top 10 Best Villains in Tollywood: The presence of an antihero merely adds to the phenomena of heroes being glorified. Because of this, the bad always tries to counteract the good in movies and other forms of fiction around the world, but it never succeeds.

It’s no surprise, then, that every film business has its own dedicated cast of villains who strive to frighten and traumatise viewers with tricks like running, rerunning, whipping, lashing, and even ruining a budding romance. The Telugu film industry is no exception; it, too, has produced some unforgettable bad guys throughout the years. Here is a list of our top 10 Telugu villains, all of whom terrified moviegoers with more than just their sinister good looks. 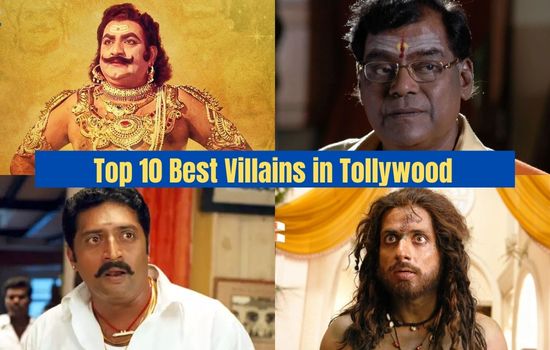 Actor, producer, and director S. V. Ranga Rao (or SVR) was most known for his work in the Telugu and Tamil film industries of India. As an actor, he stands shoulder-to-shoulder with the best of them in India’s film canon. The name “Viswa Nata Chakravarthi” has been bestowed to him.

Known simply by his surname, Rajanala, Rajanala Kaleswara Rao was a well-known Indian actor who primarily worked in Telugu media but also appeared in some Tamil, Kannada, and Hindi films.

Rao Gopal Rao was a well-known Telugu film and theatre actor and producer from India. Rao had a 25-year acting career in which he played in excess of 400 films. Rao’s infamously humorous yet horrific representations of villains made him a household name.

Manchu Bhakthavatsalam, credited and also known as Mohan Babu, is an Indian actor and producer known for his works predominantly in Telugu cinema. An alumnus of the Madras Film Institute, Mohan Babu has acted in more than 500 films in lead, supporting and a variety of roles.

Known mostly for his roles in Telugu films and theatre, Kota Srinivasa Rao is a well-known Indian character actor. On the silver screen, he has also appeared in films made in Tamil, Hindi, Kannada, and Malayalam. Rao is a former member of the legislative assembly who represented the constituency of Vijayawada East in Andhra Pradesh, India, from 1999 to 2004. His Evil smile is most loved by audience.

Raghuvaran Velayutham was an Indian actor who was featured primarily in films from the southern part of the country. In addition to his work in Tamil, Telugu, Malayalam, Kannada, and Hindi films, he has appeared in over 200 other languages’ cinematic productions. He had made a name for himself with his unique style and voice modulation, the Hindustan Times reported.

Spot Nana, aka Gangasani Rami Reddy, was a popular character in Telugu movies produced in India. Both directing and producing were roles he attempted. He has a strong reputation for playing villains and other complex characters, as well as for his deadpan comedic timing. He was a notorious bad guy with his own distinct flair and the distinctive Telangana accent.

Indian actor, director, producer, TV host, and politician Prakash Raj does it all. Awards include five National Film Awards, eight Nandi Awards, eight Tamil Nadu State Film Awards, five Filmfare Awards South, four SIIMA Awards, three CineMAA Awards, and three Vijay Awards for his work in Tamil, Telugu, Kannada, Hindi, and Malayalam-language films. Raj is one of the most in-demand performers in Indian film due to his skill with not only his native Kannada but also Telugu, Tamil, Hindi, Malayalam, English, and Marathi.

In May of 1973, Sonu Sood was born to a business owner and a schoolteacher. The roles of Pashupathy in the Telugu fantasy film Arundhati (2009) and the antagonist in Arbaaz Khan’s Dabangg opposite Salman Khan have brought Sonu the most fame.

Professionally known as Jagapathi Babu, Veeramachaneni Jagapathi Rao Chowdary is a popular Indian actor who has had a significant impact on the Telugu film industry. Apart from those languages, he has also made appearances in a handful of films made in Tamil, Hindi, Kannada, and Malayalam. He was introduced to industry as a hero and made many films in his career and turned into a villain with the movie ‘Legend’ starring Nandamuri Balakrishna in the leading role.