Top 10 Best Producer in Tollywood: Tollywood has producers who have the best record of making successful films, though the filmmaking style has changed the production cost has been increased they didn’t have been compromising in bringing the best film to the audience, in order to make the good film they are spending whooping budget, However, here in this article we have listed out the Top 10 Best Producer in Tollywood, check it out. 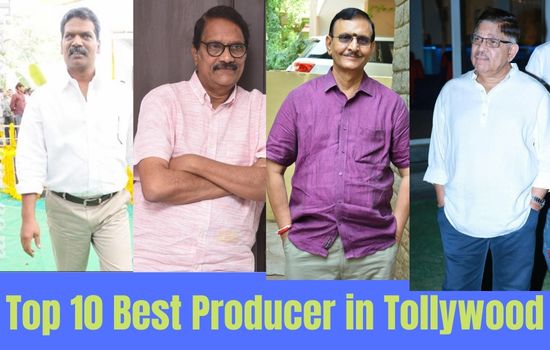 Indian film producer Mallelmala Shyam Prasad Reddy works in the Telugu cinema sector. Three Nandi Awards went to him. In 1987, he made his film-producing debut with Thalambralu. His father, M. S. Reddy, was a producer and screenwriter of motion pictures. He produced wildly popular movies like Arundhati and Ammoru.

Indian producer Chalasani Aswani Dutt is well-known for his work in Telugu movies. One of the largest production companies in the Telugu film industry, Vyjayanthi Movies, was founded by him in 1974.

Producer and distributor of Telugu movies under the name Geetha Arts, Allu Aravind is an Indian. He shares ownership of Kerala Blasters FC, an ISL team. Aravind, a member of the Allu-Konidela family, is the actor Allu Ramalingaiah’s son. Allu Venkatesh, Allu Arjun, and Allu Sirish are his sons.

The managing director of Suresh Productions is the Indian producer, studio owner, and distributor Daggubati Suresh Babu. He was given the Nagireddy-Chakrapani National Award by the state of Andhra Pradesh in 2012 for his work in popular film.

Dil Raju is the stage name of Velamakucha Venkata Ramana Reddy, an Indian film producer and distributor best known for his contributions to Telugu cinema. He is the owner of the film studio Sri Venkateswara Creations. His contributions to mainstream cinema earned him the Nagi Reddy-Chakrapani National Award in 2016.

Chandra Mohan’s nephew is Sivalenka Krishna Prasad. He attended Osmania University for his graduate studies. He began his career by translating the Telugu version of the Kannada (JIDDI) film “Rakasi Nagu.” He produced films for Sridevi Media Entertainment, Vaishnavi Cinema, and Sridevi Movies. In addition to being a member of the South Indian Film Chamber of Commerce and the Tamil Film Producers’ Council since 2006, he has been a life member of the Andhra Pradesh Film Chamber of Commerce and the A.P. Film Producers’ Council for the past 30 years.

Indian producer and distributor Bhogavalli Venkata Sathyanarayana Prasad is well-known for his contributions to Telugu cinema. He is the owner of Sri Venkateswara Cine Chitra, a movie production company. As a producer of the movies Attarintiki Daredi and Magadheera, he has won two Filmfare Awards and a SIIMA Telugu award.

Indian film producer Suryadevara Radha Krishna, popularly known as S. Radha Krishna and Chinna Babu, is well-known for his contributions to Telugu cinema. Under the auspices of Haarika & Hassine Creations, he makes movies.