Top 10 Best Girl Dancer in Tollywood of All Time: There is no denying the fact that Tollywood is home to some of the best dancers in the industry today. It’s no exaggeration to say that everyone in Tollywood has their own distinct dance style, as the industry has the largest concentration of dancers relative to other sectors. It’s not just the actors that have talent; there are also a number of amazing actresses who have wowed audiences with their dance numbers. Here is a list of the top ten Telugu actresses who have ever graced the dance floor. Some of these top 10 actresses are not strictly Telugu, but have made frequent appearances in Telugu films and are therefore included. 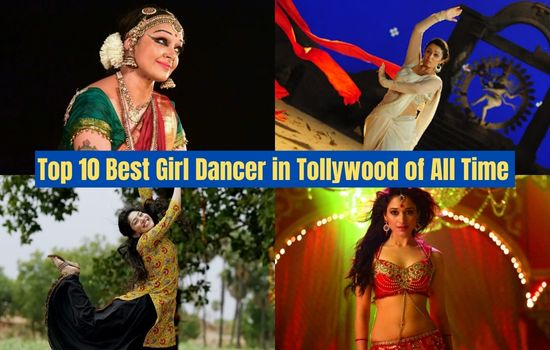 Top 10 Best Girl Dancer in Tollywood of All Time

Indian actress and Bharatanatyam dancer Shobana Chandrakumar Pillai. She has appeared in films primarily in Malayalam, Telugu, and Tamil, as well as a smattering of Hindi, Kannada, and English. She is one of the most loved classical dancer in India and she is still performing some shows all over the country defining the greatness of Indian classical dance.

Actress Vijayashanti has appeared in over 185 films across seven different languages, including Telugu, Tamil, Malayalam, Kannada, and Hindi. Both “The Lady Superstar” and “The Action Queen of Indian Cinema” are among her many titles. She is one of the best dancers of her time. She can easily mange the mass steps when appeared in commercial movies and also can manage classical moves with grace.

The South’s dancing craze was Bhanu Priya. When the famous Tamil Director, “Bharathi Raja,” heard that she was studying dance professionally to express her passion for it, he cast her in a film when she was still in high school. After observing her perform in a screen test, he cast her in Mella Pesina due to his high opinion of her acting and dancing skills. When offered performance-based roles, her acting skills are on par with her dancing ones.

Radha is one of the most prominent actresses in South Indian film, with a career spanning four decades and over two hundred films. She started out in Tamil films in the early ’80s and has since acted in Telugu, Kannada, Malayalam, and Hindi films. Her acting career took off after the success of her first film, Alaigal Oivathillai, in which she co-starred with Karthik, and she went on to star in films like Pakkathu Veetu Roja, Valibamey Vaa Vaa, Ilanjodigal, Tik Tik Tik, and Jappanil Kalyanaraman. She’s one of the few actresses who could hold their own onscreen against Chiranjeevi.

Ramya Krishnan, one of the most gifted and adaptable actresses of the contemporary South Indian film industry, exemplified the ideal combination of beauty and strength on screen. The actress who usually portrays goddesses so convincingly has also excelled at playing villains and comic roles. She has appeared in many commercial movies with some exotic songs and on the flip side she also did some movies like Narasimha, where she showcased her talent in classical dance as well.

Sai Pallavi’s dancing moves in her films are always a highlight because of her extensive training. Her dancing in recent films like Love Story has been extremely well received by a wide and young demographic. She always takes the opportunity to dance when she has it. She has the grace of a gazelle and the swiftness of the wind. Take a listen to Saranga Dariya from the film Love Story to witness Sai’s graceful swaying to the tune, which is reminiscent of the way the wind blows through the trees.

Samantha Akkineni, born Samantha Ruth Prabhu, is a south Indian actress who rose to prominence after appearing in Season 2 of The Family Man on Amazon Prime. She is not only one of Tollywood’s top actresses, but also one of the most talented dancers. She has amazing range of motion and dances with great grace. The fact that she has so many admirers should come as no surprise. She’s also quite involved in the online community, continually sharing dance videos she’s made.

Glamorousness that can only be described as “milky When it comes to the dance floor, Tamannaah is equally as impressive. Her hip-hop and Bollywood dance moves in films like Racha and Badrinath are immensely popular with the younger generation. This actress’s attractiveness, particularly her milky white complexion, catapulted her to fame. People took time to recognise her talents as an actress and dancer. She is a favourite dancer of the dapper Telugu film star Allu Arjun.

Tamannaah has dabbled in several styles of dance, from the classical to the exotic. Her impressive dancing skills were shown in the Tollywood movie Badrinath alongside Allu Arjun.

She is known as Charmme across the Tollywood community. Whenever possible, Charmy Kaur dances in her movies since she enjoys it so much. Upon the release of her first film, Nee Thodu Kavali, she gained a small but dedicated following among Tollywood viewers. Charmy has been featured in music videos for the songs Maha Maha, Ice Ice, and Jyothi Lakshmi.

Aesthetic allure One of Tollywood’s most popular dancers is Shruti Haasan. Popular with viewers are her dance sequences in films like Krack, Balupu, and Yevadu. She has appeared in a number of Hindi films in addition to her career in Telugu films. Shruti also has formal dancing training, which may come as a surprise to you. The hearts of her adoring fans were long ago captured by this multitalented actor and Tollywood’s top dancer.