Top 10 Best Director in Tollywood All Time: When it comes to Telugu movies, there’s no shortage of talented directors who’ve left their mark with classic works. Tollywood has always had its share of visionary directors who have set new standards with their groundbreaking movies. There are so many fantastic directors who are uniquely skilled in directing films across a wide variety of genres that compiling a list of the best directors of all time is an enormous undertaking. After extensive research and deliberation, we present our list of the top 10 Telugu film directors of all time. If you want to know which 10 filmmakers are responsible for elevating Telugu film to the next level, look no further than the list below. 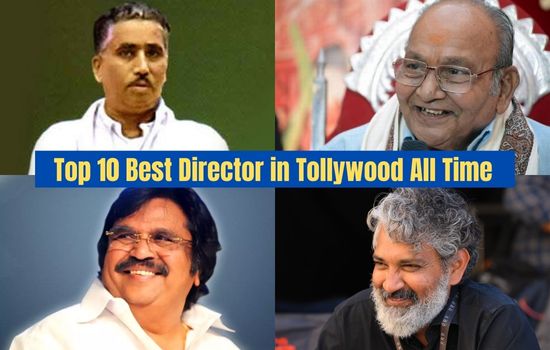 Kadiri Venkata Reddy was a prominent figure in the Telugu film industry as a director, writer, and producer. For his contributions to Telugu film, he is universally hailed as a major influence. He directed 14 feature films and won three National Film Awards and a Filmfare Award South. He is the director who created the most loved Indian movie of all time Mayabazar (as per some leading websites survey) and Pathala Bhairavi.

Films directed and produced by B. Vittalacharya are classics of the Telugu and Kannada film industries in India. In Telugu cinema, he was better known by his stage name, Janapada Brahma. Rajya Lakshmi, Vittalacharya’s debut as a director, was produced by the firm he founded, Vittal Productions. His movies are inspiration to many new directors, as he showcased some unbelievable scenes without even using any technology.

Known primarily for his contributions to Telugu film, Kasinadhuni Viswanath is an Indian filmmaker, screenwriter, and actor. He has won five National Film Awards, seven state Nandi Awards, ten Filmfare Awards South, and a Filmfare Award in Hindi. He is one of the best directors in India and focuses more on Indian culture, classical dance, classical music and many of his movies were sent for Oscar nominations list from India.

Known by his stage name Bapu, Sattiraju Lakshminarayana was an Indian film director, painter, illustrator, cartoonist, scriptwriter, music artist, and designer who worked primarily in Telugu and Hindi movies. In recognition of his achievements in Indian cinema and the arts, he was given the Padma Shri in 2013. He is master in showing the sensuality of women in Indian attires and every frame in his movies looks more like a painting.

Dasari Narayana Rao was a prominent figure in the Indian film industry, working primarily in Telugu cinema but also in Hindi cinema as a director, producer, screenwriter, actor, lyricist, and politician. As a director, he has helmed over 150 features across all genres. 150 movies is an unbelievable number for any director and this record will be untouched in Telugu.

Popularly known simply as “Singeetam,” Singeetam Srinivasa Rao is a multitalented Indian film director, screenwriter, producer, composer, and actor. Among India’s directors, he is widely considered to be among the most adaptable. His experimental films are widely regarded as having marked a watershed moment in the history of South Indian cinema.

Director, screenwriter, dramatist, and actor Jandhyala Subrahmanya Sastry (or simply Jandhyala) was a household name in India, particularly in the fields of Telugu cinema and theatre. Hasya Brahma is one of his more well-known nicknames. He is one director who made comedy movies without any vulgarity and profane words, with pure one-liners that made us laugh heartful.

Penmetsa Ram Gopal Varma, or simply RGV, is a well-known Indian filmmaker, screenwriter, and producer. He has worked in the Telugu film industry in addition to Hindi and Kannada films and television. He is one of the most talented directors of his time. Shiva Movie is a game changer for Telugu movies and later RGV moved to Mumbai and made more Hindi movies like Satya, Rangeela, Sarkar and few other movies which were still considered classics.

Koduri Srisaila Sri Rajamouli is a prominent figure in Telugu filmmaking in India. He has made a name for himself as India’s highest-paid director, and his movies often fall into the action, fantasy, and epic categories. Rajamouli is the director who made people all around the world look at Telugu cinema with ‘Bahubali’ and his recent movie ‘RRR’ is loved in other countries.

A prominent figure in the history of Telugu film, Chandra Sekhar Yeleti hails from India. The neo-noir crime film Aithe was his first effort as a director, and it won both the National Film Award for Best Feature Film in Telugu and the Nandi Award for Best Story. You might be wondering abou Chandra Shekar Yeleti being in the list and the reason for him to be in the list is that he has changed the way movies are made in Telugu with ‘Aithe’, when Telugu movies are following a routine commercial format. He also tried different genre movies that were untouched by any director in Telugu.

There are few more talented directors like Puri Jagannadh, Trivikram Srinivas, EVV Satyanarayana and many more can be added to the list.