Top 10 Best Actress in Tollywood: We would love to see acting performances on screen and many people love to involve in the movie travelling with the mood of the characters on screen. It is not that easy to involve the audience in the movie with natural performances on screen considering many distractions during the shoot. Though Indian movies are mostly male centric and commercial, there are few actresses who are capable of pulling large number of audience to the theatres with their performances and glamour. Here we are listing the best 10 actors who can perform on screen and make audience watch the movie, even if that movie has no male lead opposite them. 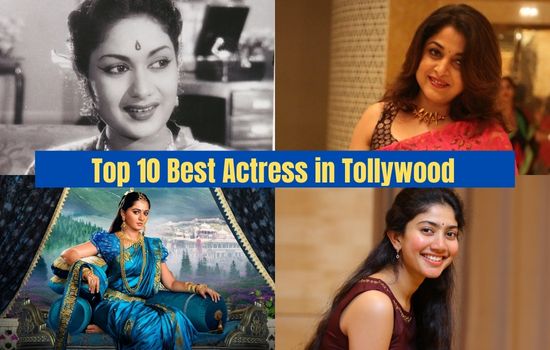 Savitri, one of the most prominent Tamil film actresses, was born on January 4, 1936. ‘Samarasam,’ a Tamil-Telugu play released in 1950, marked her first film role. Savitri, one of the most famous actresses of all time, enjoyed tremendous success in both Tamil and Telugu. Savitri is known as the “female” Sivaji Ganesan in Tamil because of her many successful film collaborations with the actor. In anticipation of the release of “Nadigaiyar Thilagam,” we take a look back at the five best films Savitri has ever made in Tamil.

Indian actress and politician Vijayashanti. Among Telugu film fans, she is best known for her roles in films with strong female protagonists. She appeared in films in a number of Indian languages, including Telugu, Tamil, Kannada, Malayalam, and Hindi. At the tender age of 15, she made her acting debut in the Tamil film Kallukkul Eeram. In Telugu movies, she had a number of starring and supporting roles. Many Filmfare and Nandi awards were bestowed upon her. Karthavyam, Osey Ramulamma, Pratighatana, Bharatanaari, etc. are just a few of her well-known films.

We adored Sridevi in every incarnation she played onscreen, from the sultry Chandni to the vivacious Miss Hawaa Hawai to the fearless MOM. She left us on February 24th, 2018, far too soon, at the young age of 54. It’s sad to learn that she’s gone, but her legacy in Indian cinema will live on in our hearts and minds forever. In the traditionally male-dominated Indian film industry, Sridevi is among a handful of actresses who have made it to the top. For any actress working in the film industry, which idolises its heroes, reaching this point in her career is a huge deal.

One of the most adaptable and gifted performers working today is Ramya Krishnan. The star power actor, who has been active in the industry since the 1980s, has amassed a large fan base because to her captivating on-screen persona and genuine acting. This veteran performer has proven that she deserves the title of “Lady Superstar” by appearing in films with such luminaries as Rajinikanth and Nagarjuna.

Many children of the 1990s who grew up in South India would name Soundarya as the actor they first saw in a movie. The actress’s death was one of the most stunning and tragic of all time, and she had dominated the charts for a full decade. She had just won the hearts of Tollywood when the chopper she was in tragically went down. The fact that she was carrying her first child added insult to injury. Soundarya’s grace, innocence, and talent continue to be remembered even today. Her followers in Andhra Pradesh and Telangana have dubbed her the “Savithri of modern film.”

Anushka Shetty, whose birth name is Sweety, goes by that moniker in everyday life. She has such a kind personality that everyone she works with, from actors and crew to directors and producers, holds her in high regard. Anushka Shetty, who made her debut as a gorgeous heroine, has since assumed the role of hero and become the go-to contact for films with a female protagonist. That’s the kind of versatility that keeps Anushka Shetty at the front of every director’s mind whenever they consider making a film with a strong female lead.

One of the most talked-about and in-demand stars of the South Indian film industry right now is Samantha Ruth Prabhu. Ye Maaya Chesave, a Telugu romantic drama directed by Gautham Vasudev Menon, marked the South diva’s 2010 film debut. Afterward, the actress received the Filmfare Award for Best Female Debut – South for her performance in the film.

The actress has often won the hearts of audiences, proving her worth to the industry. Later, the critically acclaimed Amazon web series Family Man marked the actress’s debut on the digital OTT platform. The actress’s portrayals of strong female leads in several blockbuster films made her a household name.

Among South Indian actors, Sai Pallavi ranks high in terms of her level of influence. Sai Pallavi is a popular actress in all of South India, despite having started her career in Malayalam Cinema. She gained attention in India and beyond with her song “Rowdy Baby.” Sai Pallavi is picky about who she writes. In comparison to her contemporaries, she has a fairly small filmography, but her popularity is unparalleled. In particular, it is her dance that brings so great excitement to the crowd.